In the most hidden of Porvoo‘s medieval quarter, at the heart of its ancient cobbled streets, there is a short alley on the bedrock with a few natural steps that the locals call Pirunportaat, The Stairs of the Devil, because a legend goes that he himself carved them. To one side of this scarcely frequented passage there is a tiny park on whose end, behind a thicket of bushes, a rocky platform arises. On the platform stands a wooden bench, from which a sea of roofs can be seen. Surrounded by trees and with just one entrance, this is perhaps the quietest and most secluded spot in Porvoo: away from noise, sheltered from glances and hidden from passers by; only two or three small back windows in the adjoining houses hardly overlook the place through the tree leaves. This is just where, in case you want to be alone and not disturbed.

END_OF_DOCUMENT_TOKEN_TO_BE_REPLACED

It’s the heart of the summer, and from the height south-bordering the Álava plain there lies at my feet, majestic and fertile, hot and glaring, the Ebro valley; namely the Basque side of Rioja, which is somehow a territorial inconsistence, since all southern Álava is, like Treviño, actually more Castilian than Basque; but we’re deep into an autonomic nonsense here in Spain, after Franco died.

The road from Vitoria to the height descends now towards the valley in a series of fun bends which are a good challenge for a bike rider. Pity it gets so hot as I go down into the Iberic cauldron, the valley bed where the vinyards are, that I need to take my jacket off. END_OF_DOCUMENT_TOKEN_TO_BE_REPLACED

Located on the island of Tromsoya and connected to the mainland by two bridges and the Tromsoysund tunnel, Tromso is the second largest city north of the Arctic circle –first is Murmansk, in Russia– and a main cultural centre for all northern Norway. Famous –among other things– for the old wooden houses and the modern Arctic Cathedral (quite a landmark), it hosts several international festivals in summer and makes for an excellent observatory of auroras during winter time.
Along the late middle ages, the native Sami settlers had to share this area with the Norse, who arrived as colonizers from lands more to the south; and though the rich heritage from the former is well documented, they got the mice’s share and today are almost extinct. On the year 1252 the newcomers erected on Tromsoya the northernmost church at the time, called Sancta Maria de Trums juxta paganos, i.e. “near the heathens”, namely the Laplanders; but Tromso was not just a Norwegian outpost in an area already populated by those; it was also a border to Russia: the Novgorod state had the “right” to tax the natives east of here, whereas the Norwegians taxed them to the west. During the next five hundred years Norway’s limits would be pushed eastwards, though, making Tromsø lose its character as a frontier town. END_OF_DOCUMENT_TOKEN_TO_BE_REPLACED

Porsanger is the westernmost and best known of Finnmark’s big peninsulas, as it harbours the very famous Nordkapp (Cape North), allegedly the northernmost tip of Europe, though actual things are a bit different: first off, it is not on the mainland, but on an island called Mageroya, at the end–and as a continuation–of Porsanger, whereof it is separated by a channel 1 km wide; secondly, Nordkapp is not northernmost cape of Mageroya either, but Knivskjellodden, one mile further up. Why then has Cape North got the name and the fame? Two reasons: not only it is a higher and more stunning promontory, but also the people who named it didn’t have measuring instruments as precise as there are today, and a small difference in latitude wasn’t easy to determine: one mile hither or thither is a trivia when North Pole is still 1,400 miles away. So, Nordkapp got the road and the touristic infrastructure, which includes a famous ice bar, basically a huge freezer where glasses, furniture and other elements are made of ice. In short, a tourist trap.
Or at least that is what people who went there has told me. Bua as I have already been in Slettnes lighthouse, further north in the mainland, and I dislike touristic places, I decide to skip Cape North and keep skirting the coastline to the southwest. END_OF_DOCUMENT_TOKEN_TO_BE_REPLACED 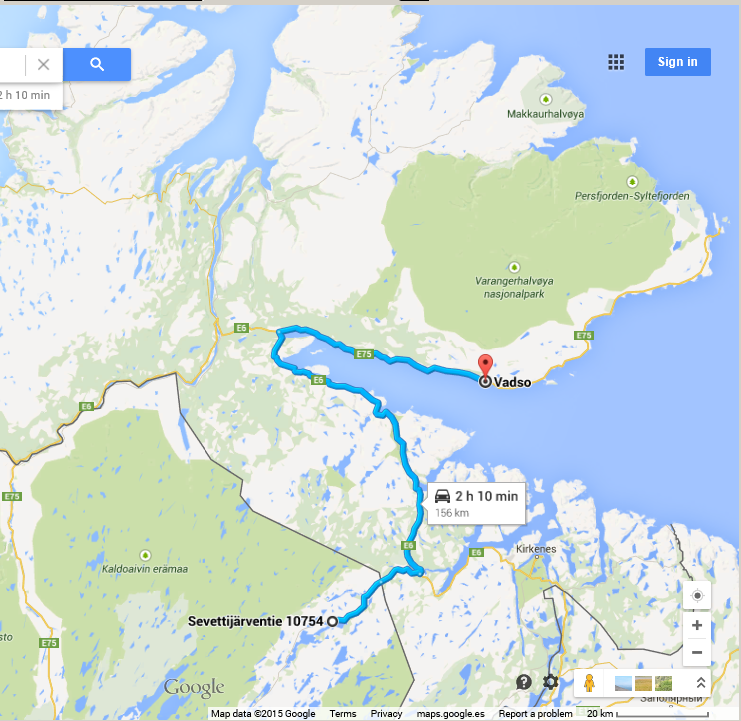 When the famous explorer of tragic death Roald Amundsen, first to reach the South Pole during his epic Antarctic expedition in 1912, headed for the opposite end of the globe (90º north) sailing on the Italian zeppelin Norge, he made a last stopover in Vadso, where the mast is still on foot that serviced the airship. Amundsen, one of those real adventurers that existed before the era of credit cards and mobile phones put an end to such job, disappeared forever in the Barents Sea two years after later, ironically during a rescue mission; and so he found his grave in the snowy and icy latitudes he had so much loved.

Today I’m visiting that island of drinking water (such is the meaning of Vadsoya) and thus pay a small tribute to those explorers who did not hesitate in sacrificing their lives–in exchange, yes, for glory, but mostly following their passions. END_OF_DOCUMENT_TOKEN_TO_BE_REPLACED