The maelstrom! Could a more dreadful situation have sounded in our ears! We were then upon the dangerous coast of Norway [where], at the tide, the pent-up waters between the islands of Ferroe and Loffoden rush with irresistible violence, forming a whirlpool from which no vessel ever escapes. There, not only vessels, but whales are sacrificed, as well as white bears from the polar regions.

Thus, in his 1870 classic Twenty Thousand Leagues Under the Sea, did Jules Verne describe the terrors of the vast maelstrom whirlpool charted by chroniclers since at least the 16th century; but it wasn’t until after Edgard Allan Poe published his bloodcurling tale A descent into the Maelstrom that this word became popular. END_OF_DOCUMENT_TOKEN_TO_BE_REPLACED

I’m still in this fable-like valley I entered yesterday through a hidden tunnel in the corner of a fiord: the campsite, the Laksagaosen ecological reserve, the Nordfjordelva river of clean turquoise blue waters coming down from the glaciers… 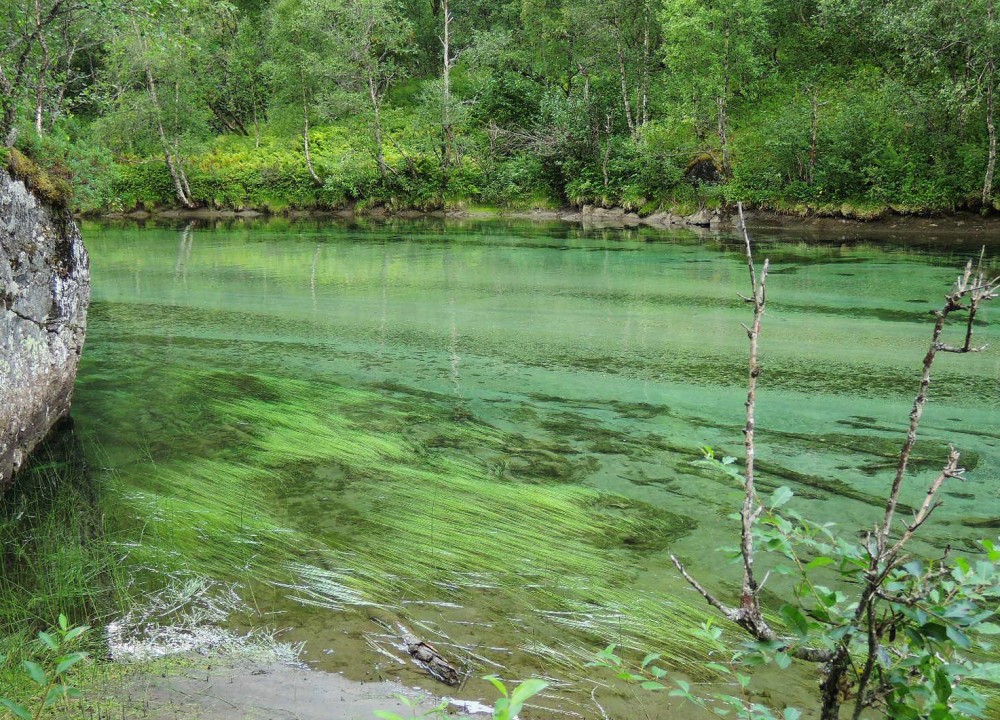 At the end of the narrow road along the valley there is a place called Lakshol, where a difficult trecking route starts that, presumedly, goes all the way up to the high lakes where the turquoise magic occurs, and giddy waterfalls too. The campsite’s caretaker has strongly reccommended it to me, and I’m going to invest a few hours in the task. My appointment with the maelstrom will need to wait one more day. END_OF_DOCUMENT_TOKEN_TO_BE_REPLACED

Along this journey to nowhere an idea has slowly been emerging from the depths of my subsonscious –where it lived as an embryo– to the surface of my awareness, rounding up there during the past few days and thus achieving the category of a goal; a goal which, like a compass, steers now Rosaura’s handlebar: to witness the maelstrom, that fabulous and awe-inspiring vortex formed in some water streams at sea.
My next target is, then, Saltstraumen (20 km from Bodo), home to Norwegian coast’s most powerful whirlpool–and perhaps also the largest konwn in the whole planet. However it be, see it or not, Bodo will be my last stop in this country, where my stay is getting too long. If on one hand the spectacular and unexpected landscapes here (among the very best highlights in my travelling life) are captivating, on the other hand I’m being kicked out by these prices (among the highest in the world, as of today). So, after Salstraumen I’ll take the first road that cuts straight to Sweden.

For going down south from this lovely house by Myrlandsfjorden where I’ve stayed the last two days, there are two alternative ferry routes: via Svolvaer-Skutvik or via Lodingen-Bognes; and though the first one looks shorter, my friendly hosts recommend to me the second, since it’s faster and cheaper, plus departs more frequently. So, I bid them farewell in the morning and off to Lodingen I ride, where I arrive one hour later, luckily in the very moment when the vehicles are boarding the ship. END_OF_DOCUMENT_TOKEN_TO_BE_REPLACED

No other time in Norway have distances deluded me more than today. On the map, getting to the west end of Lofoten from my idyllic house by the Myrlandsfjorden seemed like a reasonable morning ride; but when I was about half the way I realized that the whole afternoon would slip out of my hands if I didn’t turn back, and besides I’d get wet, since the more I rode to the west, where the islands lean over the open Atlantic, the worse and cloudier the weather was getting.

On the other hand, strange though it may seem, that much beauty presently blunted my senses; all those bends of the road, all that stopping the motorcycle every few kilometres for taking photos, for walking to the corner of a path, to the tip of a promontory, the seashore or the end of a jetty, and better enjoying this stunning nature, turned out overloading my perception. END_OF_DOCUMENT_TOKEN_TO_BE_REPLACED

Right south of Andenes (on Andoya’s north end), the jagged crests of the Bleik mountains sticking their sharp, uneven fangs into the dark belly of the clouds on a cold grey rainy morning make for one of the most chilling sights along my trip in Norway; and such a sight makes me take the eastern, leeward road for going down the island, since I assume the weather along the west route will be more rainy and unpleasant.
Further down, there is the bridge between Strand and Sortland, impressive for its height and length.

Norway seems to have a very practical policy regarding bridges, since you can find the same model repeated over and over. There must be more than hundred of these ugly but imposing colossus linking together the myriad islands of this uneven and beautiful litoral.

Whomever has had the curiosity (and patience) of reading these chapters, where I’m narrating my changing and uncertain Journey to Nowhere and giving an account of the vicissitudes and impressions I’m finding on the way, will be by now familiar with the Trollfjord, one of the Hurtigrutten coastal route’s ships. Two times earlier I’ve run into her by chance: first on the very septentrional haven of Kjollefjord, and second on that of Tromso, where I was tempted to buy a ticket for a part of the route. According to the tourist office employees, probably the most beautiful stretch of the Hurtigrutten is the passage along the narrow Tengelfjorden channel between Hinnoya and Austvagoy, 20 km long and less than 200 m wide at its narrowest point, flanked by mountains whose peaks rise above the sea more than one thousand metres. END_OF_DOCUMENT_TOKEN_TO_BE_REPLACED