Along this journey to nowhere an idea has slowly been emerging from the depths of my subsonscious –where it lived as an embryo– to the surface of my awareness, rounding up there during the past few days and thus achieving the category of a goal; a goal which, like a compass, steers now Rosaura’s handlebar: to witness the maelstrom, that fabulous and awe-inspiring vortex formed in some water streams at sea.
My next target is, then, Saltstraumen (20 km from Bodo), home to Norwegian coast’s most powerful whirlpool–and perhaps also the largest konwn in the whole planet. However it be, see it or not, Bodo will be my last stop in this country, where my stay is getting too long. If on one hand the spectacular and unexpected landscapes here (among the very best highlights in my travelling life) are captivating, on the other hand I’m being kicked out by these prices (among the highest in the world, as of today). So, after Salstraumen I’ll take the first road that cuts straight to Sweden.

For going down south from this lovely house by Myrlandsfjorden where I’ve stayed the last two days, there are two alternative ferry routes: via Svolvaer-Skutvik or via Lodingen-Bognes; and though the first one looks shorter, my friendly hosts recommend to me the second, since it’s faster and cheaper, plus departs more frequently. So, I bid them farewell in the morning and off to Lodingen I ride, where I arrive one hour later, luckily in the very moment when the vehicles are boarding the ship.

The sail to Bognes (across the Ofotfjorden) takes less than one hour. Shortly after disembarking I reach a village called Ulsvahke, where I buy some supplies for lunch. While eating there at a table outdoors, I meet a German motorcycler who’s travelling north, and we make company to one another for a while. He’s a friendly man on his sixties, all clad in expensive bike gear, and riding–of course!–a GS, from which he struggles to get off. My bones–he says–are getting stiff. Every summer–the man tells me–he comes to Norway on his motorcycle for a few days’ vacation. He praises warmly this country’s unbeatable scenery.
After lunch–unawares of the surprises awaiting me–I keep going south on route E6, watching with keen eyes the landscape around me. First, right ahead, the mountains (between Hamaroy and Steigen) rise their glacier capped peaks; and while beholding those unmistakable, blueish ice masses, I can’t help feeling that I’m witnessing something unique and very special.

Then (beyond Tommerneset village) I enter a region of a curiously shaped–and instructive–basalt geology (if I can trust my student times), on whose surface one can easily tell the lava flow just before getting solidified.

But what makes me slam on the brakes, right after coming off a tunnel (Kobbscaret), is the sudden sight of Kobbvatnet lake, whose are the most unbelievably turquoise-blue waters I’ve ever seen in my life (except once in Alaska). A truly mind-blowing setting, more dreamlike than real, as if the product of a perturbed mind, or the outcome of some unskilled painter whose brush can’t faithfully paint the water.

I’ve stopped near a small shop by the road and, all astonished, strongly feel like talking over this wonder. As soon as the shoptender sees me in amazement, she smiles, well knowing the reason; and before I can put my question, she replies: yes, that’s the way it looks all year round. When I finally put myself together and ask her why is that colour, she tells me it’s because of the rock flour: microscopic particles of rock resulting from mechanical grinding of bedrock by glacial erosion. When the meltwater (this I’ve learnt later) containing the suspended rock flour (typically feldspar and quartz) enters a river, it turns the water’s colour grey, milky white or iridiscent blue-green, and if the river flows into a glacial lake, this may appear turquoise as a result. There are actually several chromatic phenomena associated with this also called glacial flour well worth reading the wiki.

Up on Rosaura again and there I go, but only for a short stretch, because a bit further down the slope I take a turning to the left and reach the lake’s shore, where there is a campsite. It would be nice–I think–to stay here overnight, sleeping in the close vicinity of these awesome blue waters; but as I still can ride for quite a good while before the evening, I return to the main road and keep going.
Right after the next tunnel I come across another, even nicer spot: a small bridge over the short river that drains the lake and flows into the Leirfjorden; a swift stream of truly mesmerizing waters, deeper turquoise than those in the Kobbvatnet.

And this flow is so fascinating to watch at, offers so “magnetic” a sight, that I linger on for quite a while, regardless of time, taking pictures and shooting some short videos that, I hope, can convey a bit of this magic, this surrealistic spectacle I’m witnessing.

Eventually, all my craft and camera’s possibilities exhausted, I resume my riding. The road runs for a few kilometres yet along the south shore of the river, which however, as it quickly turns into a fiord (Leirfjorden) where the glaciel flour gets dilluted on its way to the open sea, soon loses its striking colour.
As to me, by now, I’m already in lodging search mode.

Yet a little further on, a new tunnel (oh these Norwegian tunnels, magic gates to other worlds, worm-holes to other universes!) takes me to yet another new landscape, this time with a quite different colour palette. Here, the mountains’ evening shades quickly spread out onto the small bay and village of Aspfjord.

And right after going around the next headland, just before entering the Tennfloget tunnel, a campsite signal leads me along a narrow byroad to the very shore of a small inner lake in a narrow valley enclosed by high hills, where the sun has already set except for the northern summits. The place, all green and shady, is quite different from the previous ones I’ve seen today, making me think of some fairy tale’s bewitched valley. The algae on the lake’s bed–rather a wide backwater of the Nordfjordelva river–lend to the water their intense emerald green hue.

The site’s reception is closed, but there’s a phone number on the door. Upon calling to the guy, he instructs me to take the nearest cabin, which is unlocked and ready; he’ll come back later and check me in, he says. I like the way people trust each other in this kind of places. The hut is a pretty one with large windows facing south and a fairly wide terrace with table, chairs and all, which unfortunately I won’t profit because the weather is rather cool. Let’s not forget that I’m still north of the Arctic circle, and summer is over by mid August. Today’s the 22nd.

Once I settle in in the not-too-clean and a wee-bit-cold hut, I go for a stroll. This part of the river (that comes from Storskog lake) is very shallow and flows in meanders, between two of which the campground sits on a piece of  sedimentary flatland. A bit further up the river, beyond a swampy area, there is a little wildlife sanctuary whose woodland floor is carpeted with the thickest layer of moss and humus I’ve ever stepped on, as soft and springy as can be.

Not a sound can be heard but for a chance muffled chirp, and not a puff of the air stirs a single leave. The stillness is so eerie, so “thick” in this otherwise sparse forest, it seems a daydream place, an enchanted wood from a legend. At every of my steps, the foot sinks a few inches in the soft green mattress, not ever touching the ground nor leaving the slightest footprint.

Besides, the whole place is full of huge mushrooms, or maybe toadstools, like those told in Alice in wonderland. I don’t think I’d be very surprised now if I came across Alice herself, coming out of a house-sized mushroom.

Very rarely in my travels–if ever–I’ve been so often and strongly impressed as today. The ferry trip, the glaciers, the lava solidified in basalt rock, the mind-blowing turquoise-blue rock-flour waters, the emerald-green river by the campground and, now, this little reservoir, so surreal, with its green carpet and fairy-tale mushrooms. It’s like if I had inadvertently crossed, some time in the morning, an invisible gate, a magic looking-glass to a world of fantasy. Norway–let me say it once more–is turning out much superior than any expectation. 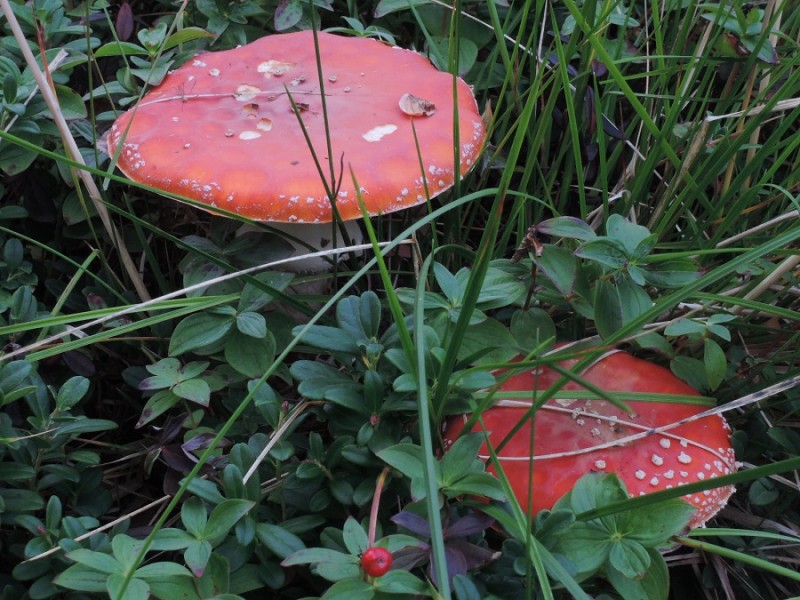