Often considered the most beautiful cruise trip in the world, Hurtigruten is a passanger line linking, on a daily basis, thirty four ports of call along the Norwegian coast, from Bergen to Kirkeness, crossing awesome fiords and going through stunning channels. The line has some dozen or so motorvessels luxuriously equipped: spa, pools, disco, shops, casino and whatnot; in other words, a tourist trap; but one which, thanks to perseverance, presence and frequency, has become part of this country’s scene almost as much as its famous litoral: it’s almost impossible, when routing Norway, not to run into some of the Hurtigruggen ships here or there.
This line started in XIXth century as a subsidised service for the most inaccessible or cut off towns along the seaboard, but as road and air infrastructures improved in time, it started losing such usefulness (along with the governmental aids); and if Hurtigruten still exists is thanks to having managed to adapt the business to those changes, and now caters mostly for tourism (though still providving a valuable cargo service). As tickets are rather expensive, most of the passengers don’t take the whole trip (eleven days return), but some particular stage along their holidays, thus enjoying a brief cruise trip whle at the same time saving the alternative long drive along the endless roads, full of bends, of the craggy Norwegian coast.
My first coming across a Hurtigruten motorship takes place just on the evening of my third day’s journey in Norway, a few hours after having visited Slettnes lighthouse: the place is called Kjollefjord, one of the most beautiful, pleasant and inspiring so far. Actually, today will count among the best ever days since I jumped on my motorcycle in Madrid, two and a half months ago.

Leaving Ifjord this morning, I’ve first gone to Gamvik and Slettnes (already described in the previous chapter), but as –same as with Vadso two days ago– you can only leave Slettnes the same way you came in, there are only three possibilities: either jumping to the sea, or staying for a living, or rather turn back for returning the same road, which is my option.
When, on my way back, I go past Mehamn, I realize I haven’t eaten anything yet, so I drop by the Arctic Hotel and, parking Rosaura by the gate, go to the bright restaurant upstairs and sit at a table by the panoramic set of windows, facing the little harbour. While waiting for my meal I order a refreshing beer of a suitable name: Arctic. It’s a splendid afternoon. From my place I can see, right opposite, the sunny and appealing terrace of Panorama Café, where some customers are sitting at the outside tables; but this is a misleading day: despite the shining sun, it’s cool out there. I’m much better here, warmed up by the light flooding in through the window panes.

Ten kilometres south of Mehamn, in the middle of nowhere, the road forks to the west towards Kjollefjord, where I’m anticipating a superb sunset because of its location, by the bottom of a fiord facing northwest; and anyway that’s the destination I’ve chosen for today. Midway from the fork, wheh the road catches up with the coast, I see my decision rewarded with a series of magnificent panoramas, the kind Norway lavishes with boundless generosity.

And what a striking country, this! I had been told wonders about Norway and read great reviews, its fame is flawless and everyone who has come praises its fiords and recommends the visit; yet, I had not imagined such abundance of landscapes, such diversity, so spectacular and astonishing a country!

Besides, for the merriment of bikers, the roads here are anything but boring. True, often the asphalt is uneven and patched, but average the riding experience is quite fine, and with all those bends there’s a lot of room for some fun.
And right behind one of those bends, unexpectedly, there shows up the estuary of Kjolle fiord.

By the way, on a scientific note, I find very interesting the geological structure this side of Nordkinn peninsula. I’m not an expert, but I bet that any geologist would be delighted with these neat strata you can watch from so close, and examine.

Located in the dead end of the estuary, and lit by a sun that never rises above 40º on the horizon, Kjollefjord appears as a charming village placidly reflected on the calm waters of the Barents sea.

And right when I arrive, the Hurtigruten (of which I hadn’t heard a word, so far) is entering the harbour. And as I always love to watch a good berthing at the quay, I come by for the manoeuvre and for peeping around. There are quite a few people on the esplanade, some awaiting for someone else’s arrival, others waiting to get on board, by foot or by car, truck drivers inside their cabins ready to climb up the ramp to the holds; and of course some onlookers like me.
As I’m bystanding there, here stops by my side a biker on a GS with German plates. He slowly takes off helmet, unplugs earmuffs, then says hello; so we talk for a couple of minutes, the typical bikers’ small talk for the sake of politeness; meanwhile, the vessel opens hatchways, lowers ramps, lays ladders, and the bustle starts. He tells me he’s going aboard, and I feel the sudden impulse of buying me another ticket and sailing with the ship wherever she goes next. But I quickly drop the idea. My journey is going well as it is, and I get good vibes about Kjollefjord: I don’t want to miss one night here at least. So, as I still have to look for acommodation, I turn back and reach for the village.
Right on the best spot “downtown”, by a lawn where centuries ago a small wooden church stood, at the very bottom of the fiord and featuring the best sunset views in town, there is the two-storied building of Nordkyn hotel, which captivates me straight away. Unless it’s too expensive, a place with such views is going to be well worth the money, so I go for it. The staff are young people, nice but somewhat unexperienced; and the room is a bit pricey, but I can afford it, so I take it. Once settled in, I realize there is some waste left in the bin by the previous guest; it hasn’t been emptied, and I wonder if the sheets are clean, so I tell the guys down at reception. Immediately they apologize and very kindly provide me with another, better room, for the same price. Very nice of them, that’s a good know-how.

(By the way: I haven’t yet used a single Crown since I exchanged, my first day in Norway. That is because in Nordic countries there is almost no circulating cash, as they take cards everywhere, for any amount, no matter how small; I remember even a gas station in Iceland where they just didn’t accept any cash! My guess is, either banks don’t charge to the shops so abusive commissions for electronic payment as in the rest of Europe, or businesses aren’t as greedy as to require a minimum purchase for accepting card payment; or mabye there is just a better consumer protection. In any case, it is a big saving for the country because they don’t need to coin money, which is very costly.)
Next thing I do is graba a beer and a snack and sit on the open terrace outside the hotel, profiting the last of the warming sunrays. To my left, there line up two or three rows of houses with their windows facing the setting sun as if all hopes and dreams would thence come, or rather as if thither to the last of Kjollefjord’s inhabitants will part, some distant day.
And there is, precisely opposite the terrace, a telling sculpture which seems to symbolize exactly the same thing: on the grass of some old graveyard, by the basement’s ruins of the long disappeared wooden church, a mother holds a girl and, eyeshading with her hand, gazes to the horizon, to the fiord’s opening, as if awaiting, or –who knows?– as if longing.

And on this same graveyard –which perhaps never was– there is but one lonely bronze tombstone, bestowing, with the pale crimson of its rust, the necessary melancholic note to the place. It always saddens me to read the gravestones’ inscriptions because I can’t help my imagination taking me back in time and placing me, with ineffable empathy, by the deceased, as if we had been acquainted… or even as if it was me who passed away. After all, isn’t it so?: all men are but one in the face of death.

Only fourty four years old. How short was life only two centuries ago! I hope they lived much more intensely than we nowadays do.
As I’m drinking my beer, the Hurtigruten ship has finished her short call at Kjollefjord and is now sailing away to the open sea. It’s about time for my long daily walk, which is my exercise quota, and also for some photo hunting. This town confirms my intuition and turns out to be an extremely picturesque place.

In the light of the sunset –which will last until dawn– the quay where the ferry has been docked remains silent and calm, with its red row of tyre rings facing the sun like kissing lips.

One hour later, back in the hotel, the lengthy spectacle of the setting sun has not yet finished. Actually, beyond the low hills of Nordkin peninsula, dusk will link up with sunrise before having ever ended; and so the sun, circling around the horizon –sometimes higher, sometimes lower– plays ring-around-the-rosey with the neighbours for the neverending summer day of the seventy-one North. 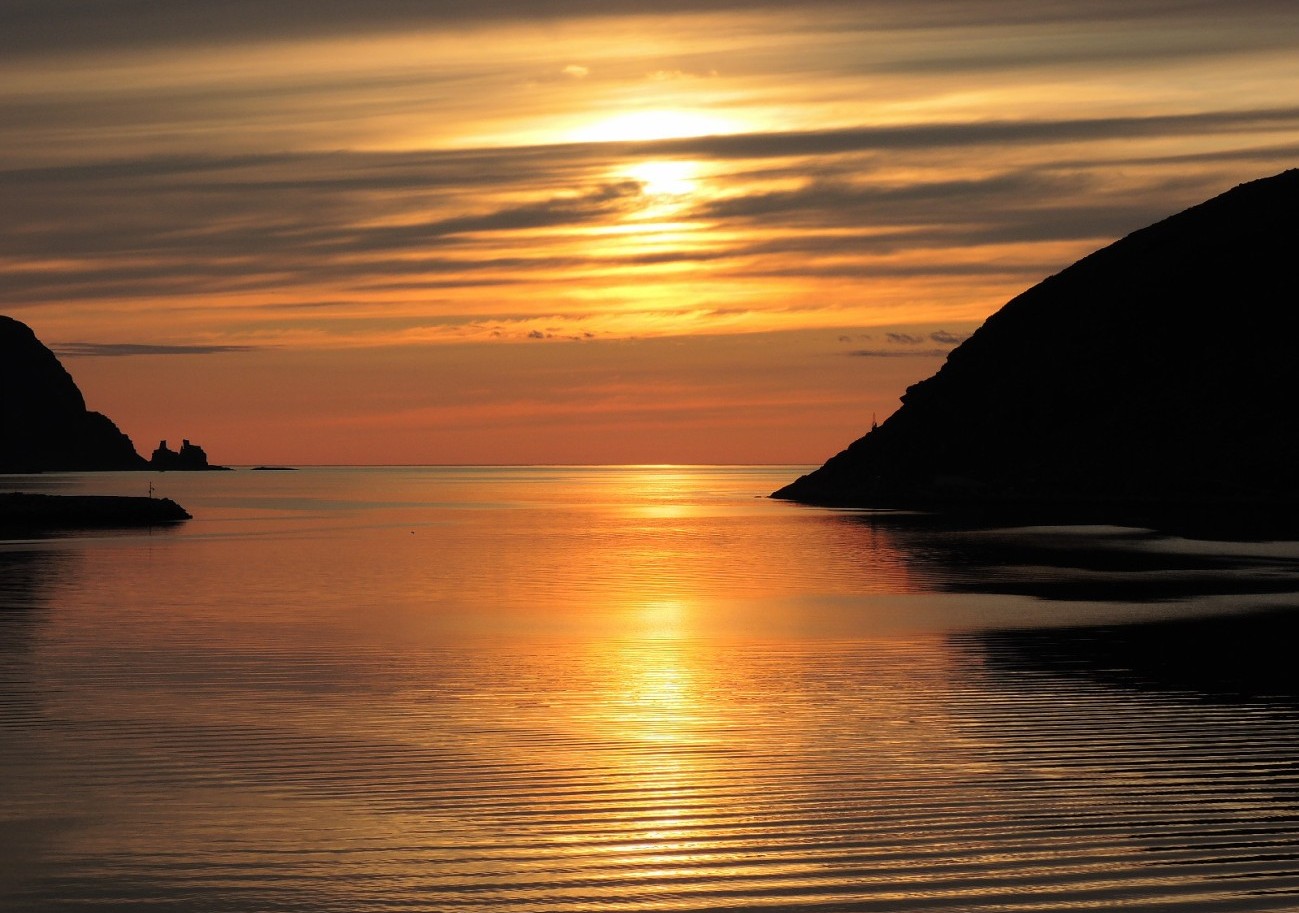