On Norway’s northeast end, where East and West silently meet, present day Finnmark county –the largest and less populated– was for centuries land of the sami, called finnar (finns) by the Norge. Its coastline measures almost seven thousand kilometres (including the islands), i.e. approximately the same as from Madrid to here. If all that shore could be covered on a motorcycle, a rider would take two months (driving at the same rate I’m doing this journey).

Nordkinn, one of the county’s four peninsulas, is a region of fascinating nature and astounding scenery. Today, I will cross its one hundred miles of tundra, at the end of which –leaning like a balcony over the Barents sea– rises the emblematic Slettnes lighthouse,often considered the top of Europe.

Starting from the lonely Ifjord where I’ve spent the night, the first thirty kilometres run along Nordkinn’s west coast, which enjoys a milder climate than inland. Therefore it is not surprising that one sixth of Finnmark’s population live within one hundred metres from the sea.

On the other hand, as the chill polar winds usually blow from the northeast, it’s also logic to find more settlements on the western seaboards, on whose most sheltered gulfs some farming can still be carried out that put a light green note on the landscapes.

But, from Bekkarfjord on, the road goes into the highlands for the next sixty kilometres, cutting across the largest and most arid part of the peninsula.

This kind of land, spanning throughout 99,9% of Nordkinn, is very rocky and lacks subsoil, therefore nothing but grass and low bush grows here. On these pool-spotted highlands wind is the only master, and even the sunniest summer days the weather feels cold.

After such a dull stretch like this, Mehamn–the administrative centre of the region–feels like a bright fishing village, dreaming perhaps of the whites and blues of distant Mediterranean. These colours invite me to a stopover, stretch my legs and take some shots. The birds’ cawings give a cheerful tone to the ships on the harbour and a feeling of something alive.

By the way, kids in these countries have the naughty habit, when bumping into a stranger, of skidding their bicicle’s rear tyre on the gravel–a move whose precise mening I ignore but whose defiant, insolent touch can’t be misinterpreted; most of all when you realize that, after the motion, they invariably look back and stare at the stranger, as if to check his reaction. This quite unwelcoming habit, that I’ve been noticing in Estonia, Finland and now also Norway, reminds me of the Spanish Gypsies when the spit on the ground on passing, which is their gauntlet thrown down.
But regardless of childish pranks, I find Mehamn so likeable that I walk to the youth hostel, Vandrerhjem, for checking on accomodation. Located on the tiny peninsula of Vardholmen, facing the village across a small natural gulf, the place has a privileged spot, on par with the beauty of the premises’ buildings. Unfortunately the hosts don’t take into account chance travelers like me, because reception is closed until the morrow: it opens only two hours a day, and I’ve arrived past noon.

There is also the Mehamn Arctic hotel, in a lovely spot downtown, by the peer, but that lies a bit out of my budget. When I’m about to take my bike for leaving, something calls my attention that I hadn’t seen since –lustrums ago– I visited the Yukon territories, in Canada: it is a hybrid vehicle, half bus and half truck, whose bizarre appearance only makes sense in scarcely popupulated terminal regions like this, where labour hand and fuel are expensive whereas stuff and passengers are little, and it doesn’t pay off to transport separately freight and people in normal buses and trucks. These hybrids optimize the resources.

From Mehamn to Gamvik–and its end of the world lighthouse, Sletness–there is only a score of kilometres, but along even so short a distance the tourist in Norway can find better and more astounding landscapes than along ten times that much in –say– Finland or Poland.

And only seldom, very seldom you’ll experience a dejá vu behind a bend of the road. Most of the times you’ll be surprised by something new around every corner.

Gamvik is just another tiny village in one of the remotest regions of Europe; a beautiful place of little importance that, however, calls me for a few weeks now with that charm of the faraway and lonely. Here I am: two and a half months after starting in Madrid this trip, right at the opposite tip of Europe. One can’t get any farther. Was Gamvik then my destination?, the Nowhere in my journey? Or maybe another self delusion for convincing myself that my life has had–perhaps not a goal, but at least some sense for the past months? It is hard to tell–and probably it doesn’t matter, as long as it works.

Methinks that these little goals, these mid-term aims I set to myself, work like the carrot in front of the monkey, to keep me carrying on. Sure, I’m glad to be here, I’m satisfied, but not really proud: there is little credit in being carried by a motorcycle on paved roads through civilized countries. Yet, some insist in calling this an adventure! How low has adventure fell, then!

By the way, now that I think of it: where are all those stunning Norweg!–more–pian blondes? Those five feet ten ladies with gorgeous bodies from our teen years, what has become of them? Did they ever exist, or were just a delusion, a myth, a fantasy of the repressed Spanish screenwriters in the seventies? I wonder because, supposing they exist, they all must live in Oslo I guess, indulging themselves in shopping, and competing for the scant guys who, thanks to the over quota, must be getting enough of procreating! I mean: as to here, in Finnmark county, there are only males, children and grannies. Thanks God that’s not what I came for!

It’s about time to visit Slettnes fyr, Gamvik’s lighthouse, three kilometres from here along a dirt track. Strangely, there is no legend about it, and nothing is remarkable on its humble cast iron structure, except for the fact that it was severely damaged during WWII and painstakingly rebuilt afterwards. Yet, this is the top north of Europe’s mainland.
There is, however, one interesting piece of information this lighthouse shares with all other on arctic latitudes: it doesn’t work from May to august due to white nights that provide an ongoing daylight lasting three months, average.

Now, when you come to think of it, saying sunset or sunrise in polar regions is a bad use of language, a concept out of context, a licence of speech extrapolated from the prevailing ideas in the rest of the globe, utterly meaningless here, where the astronomical events we know with those words do not usually occur; and when they do–if ever–they lack the significance of everywhere else.
Let’s take for instance the extreme examples of the poles, where day only breaks once in the year after a dawn that lasts two weeks, and the same for twilight. Does this have any resemblance or correspondence with our daily experience? Isn’t it thoughtless to speak of sunrise and sunset, in these cases? More yet: can those people working in Antarctica or Greenland really talk about mornings or evenings, afternoons or midnights? Actually, human beings –having evolved not far from the tropics– find it even hard to imagine a day or night hundreds of times longer than what we have learned for the last one million years. Think that a complete polar day lasts 8760 hours and equals the year.
True: virtually no one lives on the poles, and the farther we get away the more our time concepts make sense. Even so, Slettnes or Nordkapp, Nordkinn peninsula or even Finnmark county, are around 19º from the pole, and the year contains only one hundred and fifty days proper!, the rest of the time being either an ongling daylight or an ongling darkness. One needs to reach at the very least the Arctic circles for our notions of day and night, dawn and twilight, hardcoded in our genes, to start matching the timeframish and astronomical reality. Other than that, those ideas just don’t make sense.
That is the reason why I would be very surprised if someone told me that, in the tongue of Eskimos, Inuit and other natives from polar regions, there existed two words translatable to sunset and sunrise. I don’t believe they have; but if they do, I bet those hypotetical words would not match our concepts nor describe the same fenomena. Very likely those tongues have a word for the dark half of the year, another for the light half; but days and nights, dawns and twilights, I bet they don’t.

Slettnes lighthouse has a little museum and offers accommodation, which is tempting; but I’ve been sleeping the past nights (nights?) in lonely places and today I feel more like some society, at least a pub where to grab a beer and see half a dozen new faces. So, I ride on Rosaura and, slowly along the dirt track, we leave behind this Norwegian non plus ultra. 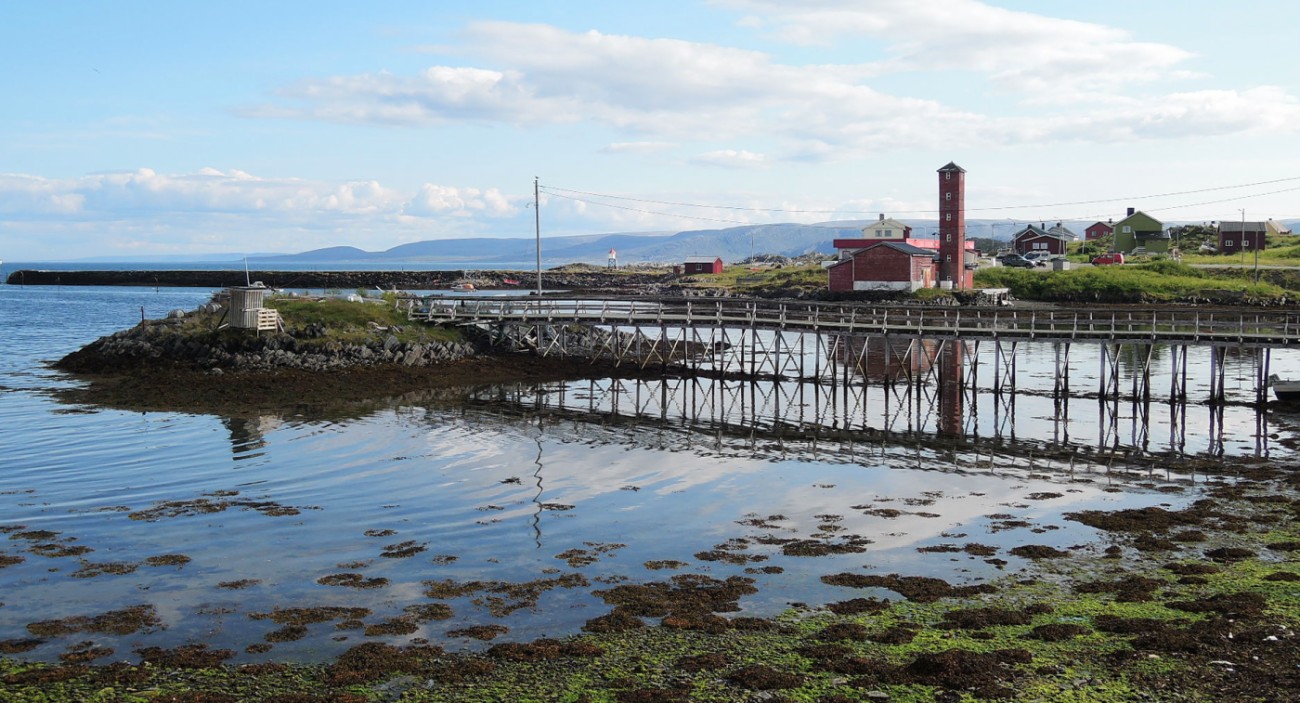 There is a guesthouse with a small pub in Gamvik ‘downtown’, but the owner is at the fish factory–a cute Russian woman informs me. She’s living here with some other fellow countrymen. This region is full of Russians working in the fishing industry or construction businesses. Her English is poor, but enough to make me understand there is a free room and she’ll be calling the owner on my behalf to ask about it. But a while later the answer comes: no; the business catters mainly as a lodging, for people who stay longer periods, and it’s not worth the trouble to host me for just one night. Sorry about that. I would have been an interesting place to stay overnight, this Russian shelter.