This September 9th will be highlighted in my logbook as, by far, the worst date in this journey; and in my personal calendar as one of those few regrettable days that life inflicts on us once in a while.
Last night it’s been a restless one. I had maximum two hours of poor quality, unsettled sleep; as if foreboding what I was doomed to undergo today. When, in the morning, I accepted the defeat against insomnia, I packed my things, left the hotel room and hit the road. But I was already tired, even before starting the day’s journey. A bad beginning for a biker; a bad omen too — or is it the same thing?
From Daugavpils (that’s Latvia), I had planned a route to Vilnius (capital of Lithuania) along the by-roads bordering Belarus. As usual, I’d take the less busy ones. And indeed they were quiet: lonely and also–but how could I have known?–dangerous, because those are the regions where freely breeds, grows and dwells, wild and unchecked, predatorless, the savage truck driver. But more on that later.
The morrow was overcast, showing signs of some rain; but since rain often faints without striking, for the moment I didn’t put on my coat.
Coming across a light-controlled construction stretch was the first setback. While I was approaching it, light was green all the time, but it turned red just two seconds before I passed; so I stopped. Only one instant before, nothing would have happened of that day’s unfortunate chain of mishaps. But those two seconds were decisive.
The traffic light cycle was no more no less than twenty minutes. So I had to stay ten endless minutes there, head of the increasingly long line of vehicles that arrived behind, waiting for the light to change. Meanwhile, I kept an eye on the clouds, checking for any sign of impending rain. When we finally got a green light, I set off and headed the caravan. Just a moment afterwards, when I had no escape, rain started. The left lane was totally impassable: craters and dunes, trenches and banks, giant caterpillars, concrete blocks, etcetera; and the right one –the ‘fit’ one– wasn’t much better: road metal, holes, stones, and lose soil quickly becoming mud with the rain. Shoulder there was none, nor a side (even as narrow as a motorcycle) where to pull over; so, I was trapped between the works and the rain, unable to put on the waterproof pants. Besides, I couldn’t go slower and try to dodge the puddles, cobbles and boulders, because I was followed by a long queue of upset drivers, angry for such a long wait. I had to keep going until that damned works stretch ended.
When I finally passed, quite wet already, I pulled over and put on the raincoat. The moment I rode on, rain stopped. Fate was playing with me. And a little further I met him, incarnated in a fiendish lorry driver. 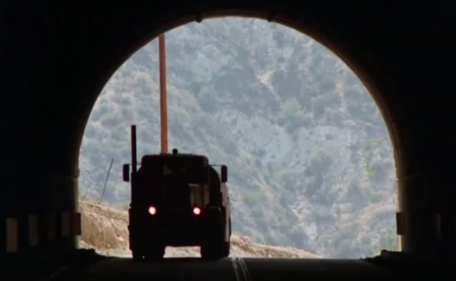 (To be continued.)
previous chapter | next chapter