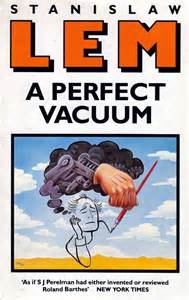 In the foreword of that joke book that is Perfect Vacuum, where its author, the Polish essayist Stanislaw Lem, reviews a series of nonexistent literary works (they reside only in the universe of his boundless imagination), the prologue writer tells us that, with this, Lem tries to give life to — or perhaps get rid of some of his overabundant ideas, considering that he has much more literary projects than biological lifespan to accomplish them. Thus, by the resource of ‘reviewing’ a few novels that, attributed to equally fictitious authors, he would’ve written himself were his life to last longer, he at least can offer to us the thought arguments or plots, along with the possible, suggested controversy or debate the hypotetical lecturers of the nonexistent books might have come up with. By the way, and for icing the cake, by the end of the foreword we are hinted to suspect that this, too — the foreword itself — is, in turn, Lem’s own craft, and not another person’s. Quite a feat of literary juggling.
Perfect Vacuum is an excellent work; a display of dialectic dexterity, intelligence, logic, and fantasy in equal measure with imagination, all of which at some passages has made me swoon.
And because I have so much liked it, I’m quoting here four of such paragraphs; not necessarily the best, but in any case remarkable ones, most of all considering the decade (the 70’s) they were written, which should suffice to give us an idea of Lem’s amazing clearvoyance and prophetic dowry. All four quotes belong to Perycalipsis, one of the book ‘reviews’ featured in the volume.
I. Creative work of value is possible when there is resistance, either of the medium or of the people at whom the work is aimed; but since, after the collapse of the prohibitions of religion and the censor, one can say everything or anything whatever, and since, with the disappearance of those attentive listeners who hung on every word, one can howl anything at anyone, literature and all its humamistic affinity is a corpse, whose advancing decay is stubbornly concealed by the next of kin. Therefore, one should seek out new terrains for creativity, those in which can be found a resistance that will lend an element of menace and risk–and therewith importance and responsibility–to the situation.
With this interesting postulate, Lem seems to suggest that there can only be credit in art when it opposes something or someone (prohibitions, censorship, power), when there is some risk–for the artist!–involved in the creating activity, and that nowaday’s impunity for humanistics can render nothing worthy.
Of course we may argue that we don’t see a reason why beauty or merit should not come out from ‘safe’ and riskless art, but even so, we must admit that there is some — if not a lot of — truth in Lem’s assertion. Personally, I can’t in this moment think of many worthy books (or art works, for that matter) whose authors didn’t oppose nothing or noone when they created them. Not many — say — good films or novels come to my mind whose maker didn’t try to break this or that rule, tear down a myth or counter a power; in other words: who didn’t try to to go against something or someone, be it a prevailing opinion, a common prejudicie, a mainstream thought, a cultural mantra… After all, is not art change?; the proposition of new ideas, is not always a sort of challenge? But then, where’s the challenge if everything is allowed, tolerated and accepted? One should seek –Lem tells us– new terrains for creativity where some menace gives importance and responsibility to our work. And this seems pretty reasonable to me, since, by writing what everyone wants to read, saying what everyone wants to hear or showing what everyone wants to watch, we may be pleasing people, but perhaps we are not creating anything of much value.
(Mark, though, that Stanislaw Lem was an accomplished rascal who constantly played the Devil’s advocate for the sake of his own amusement and testing his oratorical skills or the strength–so to say–of his fallacies; and many of his shocking statements must be taken with a good deal of skepticism, if not mistrust. As a matter of fact, in one of the other ‘reviews’ compiled in Perfect Vacuum he comes to affirm almost the opposite to what he asserts in Pericalypsis — namely: that the “prophets of inventive barrenness” are ” perverse cryptonihilists” — with as solid and strong arguments as he uses here.)
II. Our mighty civilization strives for the production of commodities as impermanent as possible in packaging as permanent as possible. The impermanent product must soon be replaced by a new one, and this is good for the economy; the permanence of the packaging, on the other hand, makes its disposal difficult, and this promotes the further developement of technology and organization. Thus the consumer copes with each consecutive article of junk on an individual basis, whereas for the removal of the packagings special antipollution programs are required, sanitary engineering, the coordination of efforts, planning, purification and decontamination plants, and so on. 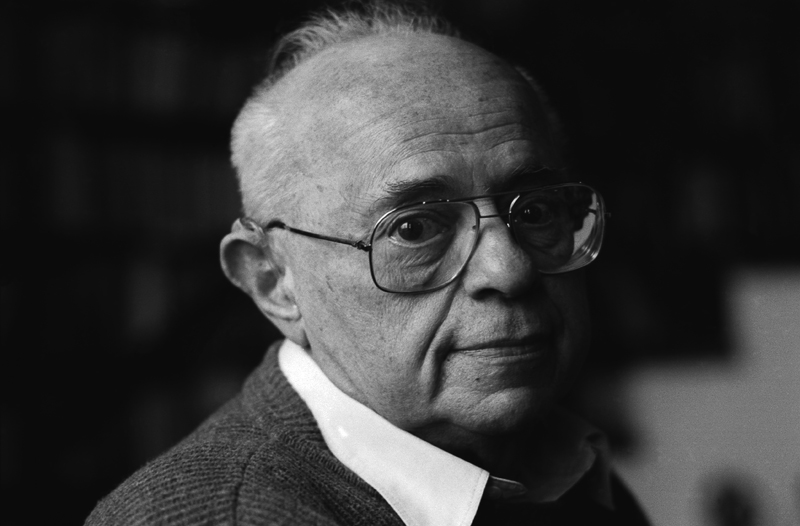 This is a gem. Truer words have never been spoken. Above all, I find creditable the already mentioned fact that this was written back in 1971; which tells about Lem’s outstanding talent for spotting and fingering phenomena that only became obvious to larger masses (and still today most people seem unable to apprehend such reality) a few decades later; and for so accurately picturing and defining what consumerism is, and whither it is heading. For, is this not precisely the point where our socioeconomics are now? Programmed obsolescence and non-disposable containers, haven’t they literally flooded our markets and dumpings by displacing every durable goods and recyclable packages? No matter how heavily brainwashed — nay: how deceived we are by the modern, fake ‘green’ fashion — or culture, the truth is that, exactly as Lem wrote almost half a century ago, we produce more and more indestructible rubbish: the waste by-product of a self-amplified, resource-depleting and destructive cycle in which the re-cycle tall tale is only one more input, gears of the same machine: the antipollution programs, the sanitary engineering, the purificatioin plants and so on. We are lectured into believing that, for helping ‘the Planet’ (as if the planet itself was a sentient being) and call ourselves ‘eco-friendly’, our move is — not to radically stop buying impermanent stuff on permanent packagings (this, we’re never even suggested), but to keep purchasing stuff as long as it’s labelled ‘recyclable’ or ‘green’, because that is how we feed the insatiable loop of consumerism and make the market happy.
III. If finding forty grains of sand in the Sahara meant saving the world, they sould not be found any more than would the forty messianic books that have already long since been written but were lost beneath strata of trash.
In line with the first quote above, this one seems to imply — rather, clearly states — that everything which is worth being written has already been written, and that anything else, the rest of literature throughout universal history, is but trash that only hampers the finding and reading of those few good works.
Obviously this is an overstatement, an idea which Lem himself could not honestly believe — otherwise he wouldn’t have written it!; but we must admit, he’s got a point there. For, how many of those messianic books can there be out there? Or let’s put it the other way around: for how much of the universsal wisdom, well worth being read and assimilated, there would be no room in given forty (make it one hundred, or even one thousand if you like: it won’t change much) well selected books? How many really worthy texts would be left out of the selection? One per cent, maybe? Not much. The problem is (and I have to agree with Lem here, whether or not he overstates) that there is so much rubbish burying those books as there are sand grains in the Sahara desert.
IV. The moderate growth of talent, its innately slow maturation, its careful weeding out, its natural selection in the purview of solicitious and discerning tastes–these are phenomena of a bygone age that died heirless. The last stimuluus that still works is a mighty howl; but when more and more people howl, employing more and more powerful amplifiers, one’s eardrums will burst before the soul learns anything.
Here we close a circle, going back towards the first quote. When I read this one, I thought: was Lem thinking about Renaissance, that long gone period in history when talent indeed seemed to grow, mature and age slowly like a good wine? Of course we often tend to think that past epochs were better than our own, but… is it not true at least about today? And if the Polish gifted writer, in year 1971, thought that already then the last working stimulus was a ‘mighty howl’, which howl more and more people were able to utter with powerful amplifiers… oh my!, what would’ve he thought if he could’ve witnessed today’s society? In any case, was he not a true visionary and futurologist? Hari Seldon himself wouldn’t have done it any better. Because hang me if such situation as Lem describes is not today’s: every other citizen seems to have a bad taste, a hasty and thoughtless opinion, and, provided with a computer and network connection (the ‘amplifying’ devices), is ready to utter his mighty howl to the world. But, surrounded by all that noise, certainly one’s eardrums burst before the soul can learn anything…