This is a great article, well worth the 5′ read; not only for the sake of nostalgia, but also as a valuable reference for many social (not just musical) events nowadays:
. 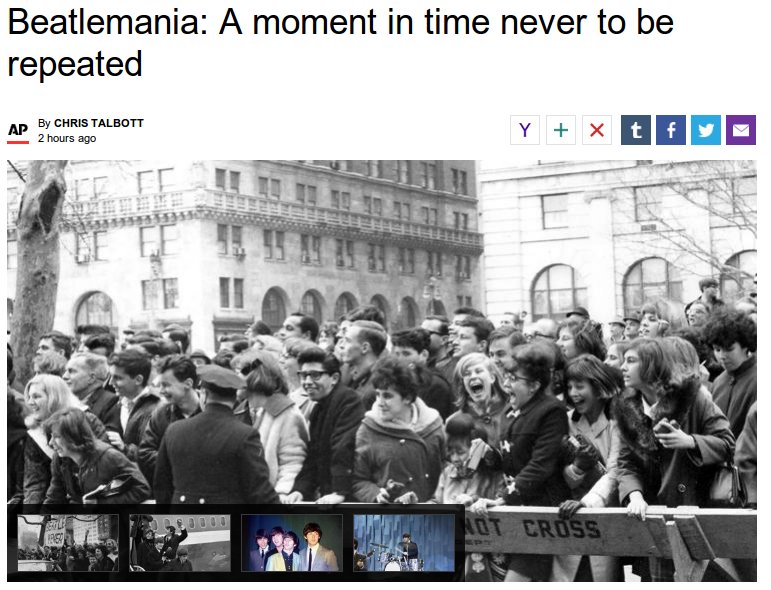 .
Who was to say, barely a week before such inmortal happening was shaking the world, another–infinitely less relevant event took place in a forlorn spot of an almost medieval Spain: among the smell of livestock and hey, donkey dungs and beehives, among the sound of horseshoes on the pebbles and the crow of cocks, a boy came to life who woud later grow up to become a lifelong devoted of that same musical band.
Indeed, as a teenager The Beatles meant for me the magical world of music, the mystery of love, the tour of emotions. And many, many more things. I can recall myself in the solitude of my home’s grave hall, playing over and over again the scant vinyls I could afford with my meagre savings. The head between the baffles for better grasping every word of their lyrics (in that British language so alien, so new to me), every note of their chords and every bit of their meanings, more than once I shed tears of thrill, sympathy and sentiment.
Later on, The Beatles were to become my generation’s symbol of identity. I learnt by heart their songs, their records and lives. I shivered and cried with the cries and the faints of their fans, as shown on TV. I admired them, and envied so much the mania they had arousen. I infinitely regretted they didn’t exist any more as a band, because I wouldn’t be able to once hear them in live; and, in this way, John Lennon’s assassination stroke me not so much as his death, but as a fatal point of no return.
Yet, I didn’t know what had gone on. Only two decades (decades!) later, my head well on my shoulders, I fully understood the whole span of their influence, the whole meaning of their music and the whole merit of their achievement: at their early twenties, being no older than my own nephews are today, The Beatles had arguably carried out the biggest spontaneous and real social revolution of all times; and beatlemania meant, no doubt, a moment in history never to be repeated… barely a week after the very day I was born.
Today, all that is but nostalgia and yearning; a bittersweet reminder of the merciless passage of time.

2 thoughts on “Beatlemania, half a century later”