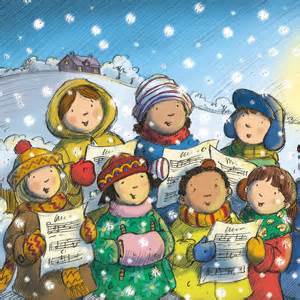 When passing by the function room at the Orthodox Institute, the man hears a choir of child-like voices, and –curious– peeps through the laces of the glass doors. He sees a group of children rehearsing Christmas carols, conducted by a young teacher. Not that young, actually, but for the last few years almost everyone seems young to him, and this -he says to himself- can only mean one thing…
Ditching with a shrug such untimely trend of thought, he quietly opens the door and steals into the large room, takes a seat on one of the rear chairs and, unnoticed, listens to the rehearsal. The atmosphere is warm, absorbing, snug like a womb must be. Outdoors, behind the windows, some feeble snowflakes fall softly against the dark background, putting on the night a white Christmas touch.
After a few carols have been sung, and when the pure and innocent mouths of the children (they are indeed young!) intone the melancholy notes of Silent Night, two lonely tears roll down the man’s cheeks. But it’s not this carol’s particular sadness, by itself, what made those tears well up, but the gloom in which such songs immerse the adults. Silent Night is not necessarily pathetic; it doesn’t move to sobbing for the sole force of its melody or lyrics, but for what it means to our man.
I have never seen a child moved –let alone weep– while listening or singing a Christmas carol. When they sing them, they live them in such a way that they themselves, the children, become music and carol essence, their bright countenances, their rounded lips, their spirits deep into the notes they utter, but remain unaware of the beauty they’re creating, of the furrow they’re ploughing and the wake they’re leaving behind. Us, however, when listening to a carol, it’s precisely that forrow what we see, the one we once ploughed –unawares!– such a long time ago, same as these children are doing today and, when they’ve already grown up –alas, so fast!– others will do in the future; and it’s the Passing away of Time carol, the flight of lustrums, what we’re actually listening to. No; Silent Night does not touch us for its sadness, but for it reminds us of our childhood and makes us see ourselves when we were that age. It’s our lost youth and innocence what we mourn, our irrecoverable life past in a blink, not the thrill that Christ the Saviour is born.