There are so many TV series out there, one can’t watch them all; not even just the ‘best’ ones (supposing ‘best’ makes any sense when it comes to tastes). Unlike films, series are very much time consuming, and often addictive (actually, for the consumerism cultures we’re totally immerse in, such addictiveness is the ultimate goal of producers, and it is much preferred over quality), and unless you’re as sickly overcritical as I am, or have thrice my free time, you’ll be simply overflowed with the offer and just pick whichever serial is made the easiest for you to watch, or the ones more aggressively distributed and publicized.
And this is how, hadn’t you come across this post, you would miss one of the most and true unforgettable TV series ever: 17 moments of spring (Semnadtsat mgnoveniy vesny); an excellent twelve-chapter Soviet production from the 70’s directed by Tatyana Lioznova that relates, in a WWII historical background,  the vicissitudes of fictional character Colonel Maksim Maksimovich Isayev, a Soviet undercover agent infiltrated as an officer into Hitler’s SD under the name of Max Stirlitz. The plot covers seventeen moments spread throughout February and March 1945 (not really spring, but well), narrating how Stirlitz struggles to carry out a mission he’s received from Moscow: to ascertain whether some high-rank German officers are trying to secretly negotiate a separate peace deal with the allies in the Western front (that would allow the Germans to concentrate their forces in the East) and, in case affirmative, to try to foil any such agreement.
Leaving aside some hardly noticed (and mostly irrelevant) anachronisms and historical inaccuracies, this production is almost a masterpiece in the gender of espionage, and one of the most devilish challenges a fan of chess and of police stories may find on video. The main plot is rather twisted, yet quite logical, and gets complicated by a number of side sub-plots, all of which, in turn, also make sense. Despite this, the whole story is graciously and ‘honestly’ set forth and carried out: the viewer is never tricked into believing what is not, nor fooled by other means; on the contrary, we find ourselves always having at least as much information as Stirlitz and the other characters themselves. Then, it’s up to us -or to our wits- to understand what’s going on or not. And mind: it is required a good deal of anticipation and forward thinking skills (like in chess; not my case) for catching up with and digging the superabundant information we’re provided with. Which in my opinion only makes it more fun, because this is a series we can (and maybe must) watch more than once in order to understand it fully; and every time we’ll enjoy it as much. 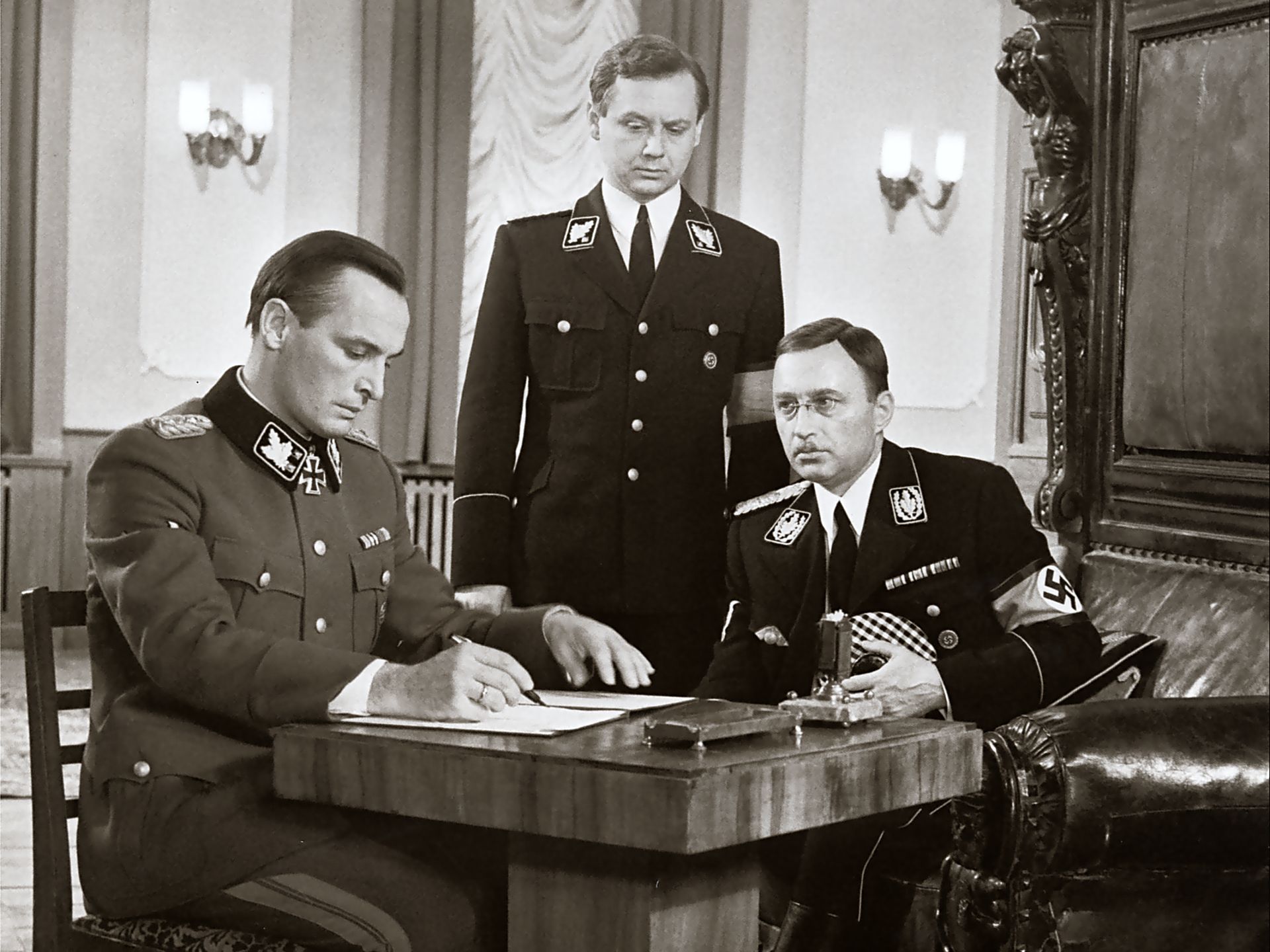 Despite nowadays Russian society having turned to joking about Stirlitz (which evidences how much “he” has become part of their culture), the truth is that 17 moments of spring is considered arguably the best Soviet espionage production of all times; and in any case it means, for us Westerners, a breeze of fresh air. The mise en scène is very different from what we’ve got used to by our predictable film industries; it is plain and honest, it does not rely on affected techniques (let alone special effects or -the Soviets be blessed- uncalled-for sex scenes) for arising and keeping our interest, or on the contrary for distracting our attention away from the main plot; and, being so ‘obstacle-free’, it relies solely on its undeniable virtues: a great script with an almost impeccable plot, a very good quality shooting, a variety of scenarios and situations, an excellent cast of actors who interpret fabulously their roles (very far, by the by, from the stereotyped behavioural clichés in Western cinema), and a brillant, enjoyable set of dialogues that offer to the curious viewer a good deal of food for thought.
Besides, and leaving aside the Soviet propaganda I’ll mention next, from a historical point of view this serial turns out to be quite objective and very didactic: by the end of the last chapter, we’ve learned quite a lot about many events that took place during the last months of WWII, about some of the real people who played the key roles by then, and a number of other details of the time. And even though -of course- the SS, SD and Gestapo officers are the ‘bad guys’, they are not depicted as excessively revolting. Some of them even appear as sympathetic. God forbid, here there are no your typical super-cruel, easy-to-defeat stupid bloke that the oversimplifying and beguiling European or Usamerican films have got us used to. To top it all, the scriptwriter has had the good taste of leaving Hitler almost totally aside of the plot. 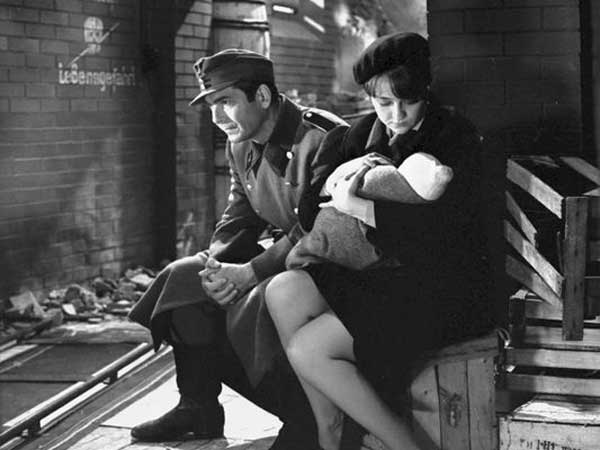 There is, yes, as corresponds to most Soviet films in those times, the official USSR patriotic propaganda, in the form of interespersed (and rather out of place) newsreels and war-at-the-front fragments from the library pictures, or some other social(istic) historical events. But these, be it said on behalf of the director, were inserted in the final cut by requirement of the censorship. Thankfully for us, since there’s nothing interesting in them, we can easily (and safely!) skip them just by fast-forwarding the video.
Naturally, there is also room in 17 moments of spring for a quasi love story that, slowly flowing, takes place in the background; but it is treated so elegantly and in such a ‘restrained’ way, that not only it doesn’t ‘pollute’ the main plot with tacky or pink cloying, but actually glows of its own with a classy and heroic romanticism.
Lastly, I can’t but mention the beautiful soundtrack, with music and songs composed by Mikael Tariverdiev. Part of it is instrumental, but two of the themes, with lyrics, are repeated several times throughout the chapters, and though I don’t understand the words, I find them very captivating. Particularly one, called Gde-to daleko (Somewhere far away), I don’t get tired of listening to.
By the way, this below is one of the most original, intense and meaningful ‘meetings’ I’ve ever watched. Apparently, the producers objected to this six-minutes long wordless scene, claiming it was monotonous; but the director insisted in retaining it, and actually it later became one of the most memorable parts of the series.

Talking about which, on the critical side -though mainly for the sake of objecting something- I’ll mention two negative points: First, the action tends to, in some moments, be a tad bit slow, and every chapter is ‘loaded’ (besides the propagandistic fragments above mentioned) with a few needless minutes of ’empty shooting’ (nothing happens) that could -and perhaps should- have been spared on behalf of dynamism. Second — and perhaps this is the serial’s main issue, Stirlitz is a simply too perfect a heroe, the quintessence of all virtues: moderate, calm, valiant, chivalrous, self-possessed, balanced, likeable, you-name-it, and waaaay too intelligent: even in the most critical and unpredictable circumstances, he outsmarts and manages to fool virtually everyone else. Which makes him look a too implausible character to possibly ever occur. But this is about the only concession we are asked to grant to the script, and even if only because the guy is so modest, we are happy to turn a blind eye on this flaw; which, in any case, doesn’t get in our way for fully enjoying the twelve chapters of this so very fine serial.
You can find them all on Youtube with English subtitles, or can download them to your computer, the torrents being easy to find. Watch them whichever way you want, but do watch them. I bet you won’t regret.