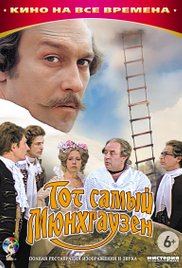 This Russian version of the renowned Munchhausen adventures is, by far, the best of them all, both in print and on stage — though perhaps ‘the best’ doesn’t mean much in this case, since a one-eyed person can always be the king in the blinds’ realm. No: The very same Münchhausen is far above other attempts to bring Raspe’s literary work to screen, and the script by Grigoriy Gorin is also far above the book.
Baron Karl Hyeronymous von Münchhausen was an interesting, real-life German personage from 18th century who, as history has it, used to entertain his audience with the exaggerated tale — nay, with blatantly impossible stories about his travels and adventures, though these were told in such matter-of-factly way that it would be quite unfair to designate him as a mere liar. Out of this baron and his tales, another no less interesting character surnamed Raspe, an ‘impudent scoundrel’, wrote and sent to print a number of editions of a book (whose authorship he wouldn’t acknowledge) under titles like Outrageous adventures of baron Munchausen that, in years to come, would became a classic in the genre of marvelous travels, in par with Gulliver or Crusoe. 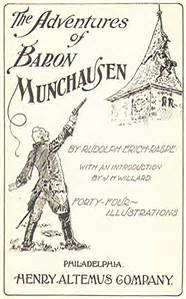 One century and a half later, Raspe’s book was taken to stage, and throughout the following decades several films were made, the most relevant of which are a 1943 German production, a Czech animated version in 1961, this Russian movie for TV (Tot samyj Mjunkhgauzen), dated 1979, and an obscure Hollywood production from 1988 (Uma Thurman and Robin Williams in the cast). But, as I say, the Russian beats them all by a landslide, in every possible way: direction (by Mark Zakharov), scenography, interpretation and, most of all, the script: while the others, targeted to a children’s audience, barely reproduce some of the baron’s adventures, without aiming any further or deeper, Gorin’s script tells us a nicer, linear story meant for adults, and takes a more ambitious approach — though thankfully not pretentious, brilliantly playing with absurd or paradoxical ideas, more or less mindblowing, hilarious or dramatic, ultimately aimed to offer us a series of moral dilemmas.
Now, how do you classify a such a movie? When fantasy, adventure, absurd, humour and even a shade of science fiction are used to provide the spectator with moral and philosophical questions, there is no genre cage for the result; no standard to compare it with. Yet, Tot samyj Mjunkhgauzen‘s worth is beyond discussion, and I daresay it is a true gem, a masterpiece, albeit a rather unknown one. 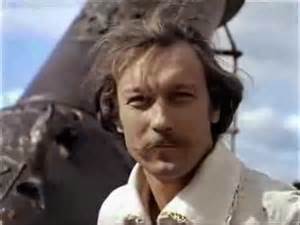 Except for his very existence, everything about Karl Münchhausen is absolutely fantastic, his whole life being built upon irrational “facts”; and though we’re apparently suggested that he is just a barefaced liar or a madman, his lucidity is out of question and the total seriousness with which he tells his tales or provides presumed evidence thereof are, rather, hints pointing in quite another direction: perhaps the impossible and the absurd are here meant to be real, which is the only way we can understand the baron. We are subtly invited to join the plot — or so I interpret; to be part of the allegory; and once inside it, we get mesmerized by Karl’s powerful personality, by his puzzling challenges and his alluring halo. We are drawn to him by the strength of his self-assuredness, and even if we don’t seriously believe him (Münchhausen’s own world), still we can’t help believing in him, in Münchhausen the man. 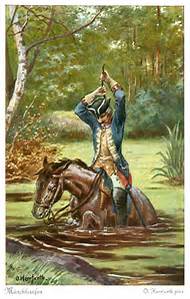 On the other hand, though a smart and tasteful humour is present throughout the whole story, and despite the baron himself entreating us to take life, and mostly his tales, with a grain of salt, by no means his word should be called into question: for him, humour is a serious matter, being accurate is very important and telling the truth is essential — like when he says he pulled himself (and horse!) out of a mire…
Nevertheless, there is one person, and only one, who trusts him blindly and unquestioningly: his endearing servant, whose faith beyond doubt and whose loyalty without boundaries are poingnant. His affection for the master is admirably pure, unstained by doubt or mistrust, and in this sense he is above Karl’s own fiancée, Marta, who -despite her love- does not fully believe him; not quite. Surely she is devoted to him; she loves his uniqueness, his amusing, romantic and fun character; but her practical instinct is almost as powerful as this love, and both forces inside her hold a struggle that, in the end, becomes heroic: in one of the most touching scenes, she is forced to decide whether to remain faithful to Münchhausen and sentence him to death, or to treason him in order to spare his life.
But what would be a Russian movie without tears? There are a few beautiful and endearing moments, like that when Karl is cornered by the dull society and, out of love for Marta, must renounce to himself and give up the most valuable thing for him in life, which is truth — paradoxically. And because he is such a likeable fellow, we immediately sympathise with him, and we can’t help being moved by his disgrace.
Thus, by and by, the action leads us skillfully and gracefully, with a double sommersault of the absurd, towards a puzzling quandary, a question that might overshadow Hamlet’s doubts, a challenge to any person who has ever been concerned by the problem of coherence and personal honesty. Because to fight and sacrifice for the sake of truth or other highly esteemed values and morals is trivial in the heroes’ world; but to fight and sacrifice for the reality of fantasy… this I have never seen before, except perhaps in Cervantes’ Quixote. Grigoriy Gorin’s Münchhausen might thus be one of the biggest heroes ever. 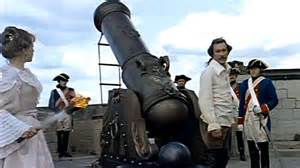 Enough. This movie is a daring toast to inconformity and a sublime homage to coherence, integrity and truth — funny though it may seem. I sincerely believe that Gorin has, in this play, outshone Shakespeare. In one of my favourite scenes -perhaps the best one-  we hear Karl saying to the audience, about himself, this: you haven’t yet understood that baron Munchhausen is not famous for his deeds, for his amazing adventures or for his heroic feats. Baron Munchhausen is famous for always telling the truth!