It is said that, when the Polish came to Landsberg for repopulating the town, they found the empty dwellings as had been left by the germans when hastily evacuated them: furniture, belongings, pantries and even –in some homes– the meal in the plates at the table; as if a ghost town whose dwellers had suddenly vanished. Thousands of Germans had had to flee in a hurry at the approaching Soviet troops.

Indeed, at the end of WWII the jointed governments of USA, URSS and UK, self-righteously redrawing the European borders in the Potsdam Conference, decided to generously gift Poland with a strip of German territory from which its inhabitants had been kicked out. In this strip of land was, among others, the town of Landsberg. The Polish renamed it as Gorzów Wielkopolski.

This is where I’m going to stay a couple of days, spending my last zlotis, purchasing some cheap clothes and bidding farewell to Poland before I cross the border of the Euro zone, fifty kilometres to the west.

While checking the map to get oriented, I’m approached by a smiling and agreeable old lady who, out of the blue, starts commenting on and asking about me and Rosaura: the bike’s side cases, this adventure riding, my home country, my mileage, my destination… Pity I can’t speak Polish, because I’d love to chat wit her. I try to answer her inquiries as best as I can, but once she realizes our poor understanding, she wishes me a good day and leaves. I wish all of us were so hospitable.

Among the several available lodgements, I opt for one not listed online: a worn out grey hotel in a quiet residential quarter on a hill. The receptionist, quite pleasant, tells me it used to be a military building; and –I don’t know why– this piece of information inspires me confidence. In fact, with its little back garden, its stale looks and hoary woodwork, the place reminds me somewhat of those old military residences where I’ve been sometimes in Spain. By sheer chance –I reckon– I’ve landed in the best quarter in town, where most of the houses are individual residences amidst gardened plots and many trees.

Sauntering now through Gorzów, at first something strikes me as familiar in the prevailing architecture; and then it dawns on me: this town reminds me of Havana!, because of all those once sumptuous and classy housings, now neglected — when not about to fall down, the dented façades a pray to graffiti, the propped up balconies and similar details. I suppose we can blame the communistic period for this decadence.

I come to a bar at a corner in a circus, at whose tables on the terrace a few elderly people are sitting; the kind of place I’m usually attracted to. I order a tea and sit there for a while, observing the other customers. Normally I find older persons more interesting. The place oozes nostalgia: a grey-haired man smokes a pipe by the door; another one to my right leans over a book, drinking his beer; a small group chats over a bottle of vodka in a table nearby; opposite, by the shade of the hedge, three swearing blokes, half intoxicated, complete the set.

As discreetly as I can, I shoot three or four pics with my camera; then put it back to my pocket and take out my phone for the usual email checking, social networking, and recording a few speech notes that are used later on for writing this blog. 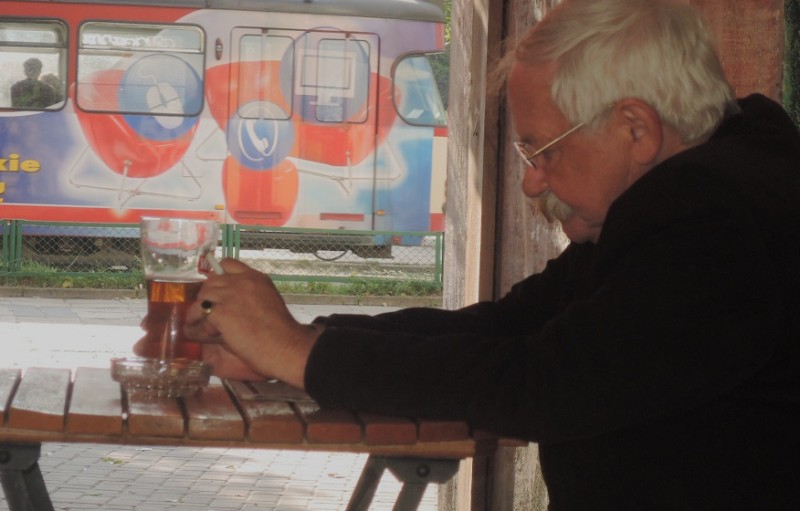 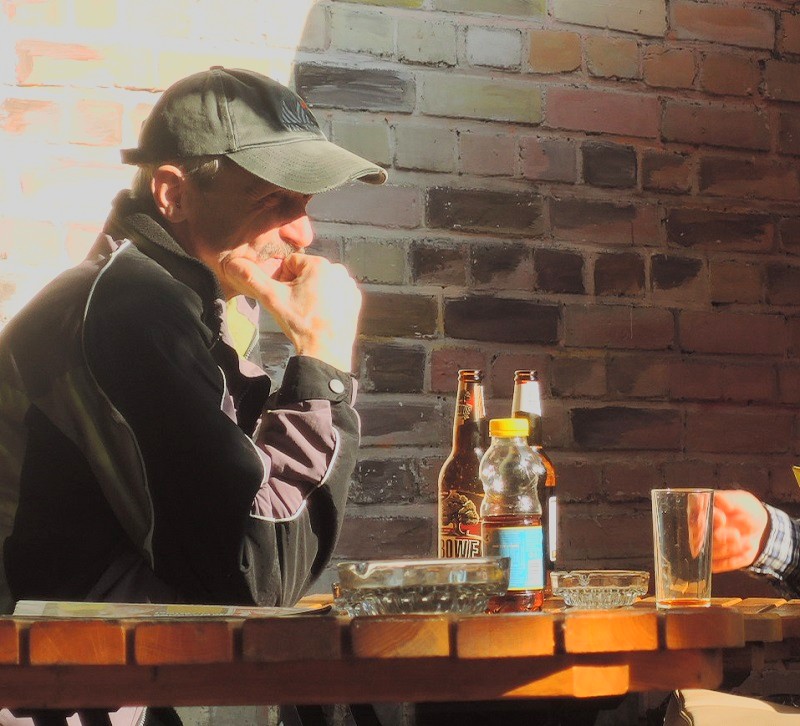 After a good while, when I’m leaving, one of the fellows in the corner comes up to me and, letting out a few kurwas, says something about ‘all those photographs’. Ignoring him, I move to one side, but he hampers my way out and, insisting on the photographs, demands my mobile; which of course I don’t want to give. First, I haven’t taken a single picture with it; second, it’s none of his business: neither he nor his friends had been of my interest. But I can’t express myself in Polish; so, again I try to side-step for getting rid of him; but he keeps blocking my exit and here comes now one of his pals to reinforce the wall.
Elbow to elbow, their harassment becomes more hostile: with threatening gestures they demand I give them my device. For the third time I try to make way, pushing their bodies with my shoulder, but no game: they’re determined to spoil for a fitght, cornering me against table and wall. Now the third mate, making as if to intercede, approaches us; but then he only wants to lead the others’ requirements: who the kurwa were you photographing?, what the kurwa you doing taking kurwa pictures to people?, give us the kurwa phone! Except for their easily intelligible swearword –virtually the only one in Polish: kurwa— and the other one, komórka, which means mobile, I don’t really understand what they’re saying, but their meaning isn’t hard to guess. Unsuccessfully, I try to play the fool by speaking to them in Spanish. This is turning to be a tight spot.
Then a fat lady in her fifties, the woman in charge of the bar, comes out to reestablish order, what’s going on here?, she says. Thanks God, just in time, I think. But my relief lasts only a couple of seconds, what it takes me to realize she has just come to take command of the arrested (i.e., me), the interrogation and the demand: the photos, the mobile, etc. Well, these people are really getting up my nose and I don’t bloody want to give them the damned handy; if they want it, they’ll have to take it by force.
It’s a dire strait and minutes seem very long to me. At her command, the three blokes have taken a step back, so that she can better ‘deal with me’ and get away with the common pretence; though, they’re ready to intervene at her request. A second waitress gets out and joins the colective exigence. I space out. Are these folks all nuts, or what? This reminds me a scene on some movie by Tennessee Williams. Quite diffidently, I appeal twice to the police authority, but to no use: to hell with the police!, the troublemakers shout. Fortunately the manager keeps them at bay: perhaps, after all, she doesn’t want a row in her terrace? And then, before she addresses me again, I see my chance: taking advantage of the split second they’ve lowered their guad, I feint and run away. One of the rowdies starts off after me, but gives up after three strides: running was probably out of the script.
Phew! Though I’ve got away by the skin of my teeth, they’ve sure given me a hard time. Just another bad experience with Slavic aggressivity for the records. Needless to say, I haven’t come close to that place for the rest of the day.

A girl I’ve met here tells me that the small commerce in the old town centre declined very much when the new shopping mall was built across the river, where mostly franchises and multinationals opened their doors. As usual, governments and councils favour the “big foreign investors” under the excuse of immediate (precarious, that’s never said) jobs and money influx, at the expense of destroying the small commerce and sources of wealth that might be more durable and sustainable, doubltless more diverse, though perhaps less spectacular. Capitalist economies always end up prostituting themselves, because the money and the tinsel buy the politicians’ will and consciences.
It’s the evening. Already at the hotel, I go downstairs for supper. The restaurant looks odd, a place in the style of post-communistic Poland. It’s cold as a fridge. Two intoxicated men drink the last-but-one beer and an obese woman sits at the bar chatting with the tender, her fat ass overflowing the stool, her knickers showing above the trousers. On a pool table in the corner, three melancholic balls doze on the filthy, stained cloth. There is no menu for dinner: only one dish is served. Ok, please give me that. I eat the food in silence, it’s not so bad accompanied by a beer. When I’m done, I pay the meager price and go back to my room…
I’ve dreamt of my friend B. He had just returned from a journey, skin and bone like a Jewish in an extermination camp, very changed in his features as well as his character. He admitted to it, yes, I’ve changed a lot during this trip; but he wouldn’t say the reason. When I wake up, I feel puzzled, confused. I know every dream has a meaning, but today I give up analyzing this one about my friend’s journey. I’ve got to carry on mine: my own Journey to Nowhere.