Right south of Andenes (on Andoya’s north end), the jagged crests of the Bleik mountains sticking their sharp, uneven fangs into the dark belly of the clouds on a cold grey rainy morning make for one of the most chilling sights along my trip in Norway; and such a sight makes me take the eastern, leeward road for going down the island, since I assume the weather along the west route will be more rainy and unpleasant.
Further down, there is the bridge between Strand and Sortland, impressive for its height and length.

Norway seems to have a very practical policy regarding bridges, since you can find the same model repeated over and over. There must be more than hundred of these ugly but imposing colossus linking together the myriad islands of this uneven and beautiful litoral.

Whomever has had the curiosity (and patience) of reading these chapters, where I’m narrating my changing and uncertain Journey to Nowhere and giving an account of the vicissitudes and impressions I’m finding on the way, will be by now familiar with the Trollfjord, one of the Hurtigrutten coastal route’s ships. Two times earlier I’ve run into her by chance: first on the very septentrional haven of Kjollefjord, and second on that of Tromso, where I was tempted to buy a ticket for a part of the route. According to the tourist office employees, probably the most beautiful stretch of the Hurtigrutten is the passage along the narrow Tengelfjorden channel between Hinnoya and Austvagoy, 20 km long and less than 200 m wide at its narrowest point, flanked by mountains whose peaks rise above the sea more than one thousand metres.

Now, who would have guessed that I was to run into the ship, for the third time, right on that channel’s mouth?, that our paths–by land and water–would cross again in the very moment when the Trollfjord headed for the narrow gorge and I for the bridge over it? Pulling over on top of the bridge, I behold both the approaching ship, swerving round the fiord’s islets from the north, and a stunning panoramic of Tengelfjorden to the south.

Then the idea springs in my mind to follow her on my motorcycle along the road that runs parallel to the channel and take a bunch of nice photographs, and some videos.

By the way, some passengers on the aft deck of the vessel, after passing underneath the bridge, turn back for taking some pictures and, like it or not, they shoot me as well; so, my small and lonely silhouette leaning on the bridge’s railing will end up in more than one trip album.

Though the Trollfjord is making probably more than fifteen knots, it’s not hard to chase her, partly thanks to no traffic at all on the road. I overtake her and stop a little further, on the places with best views, for taking the photographs; and so on several times. My pursuit is so persistent that, at every new stop I make, more new passengers gather on the port gunwale, watching me –I guess– with curiosity. Some of them wave their arms. 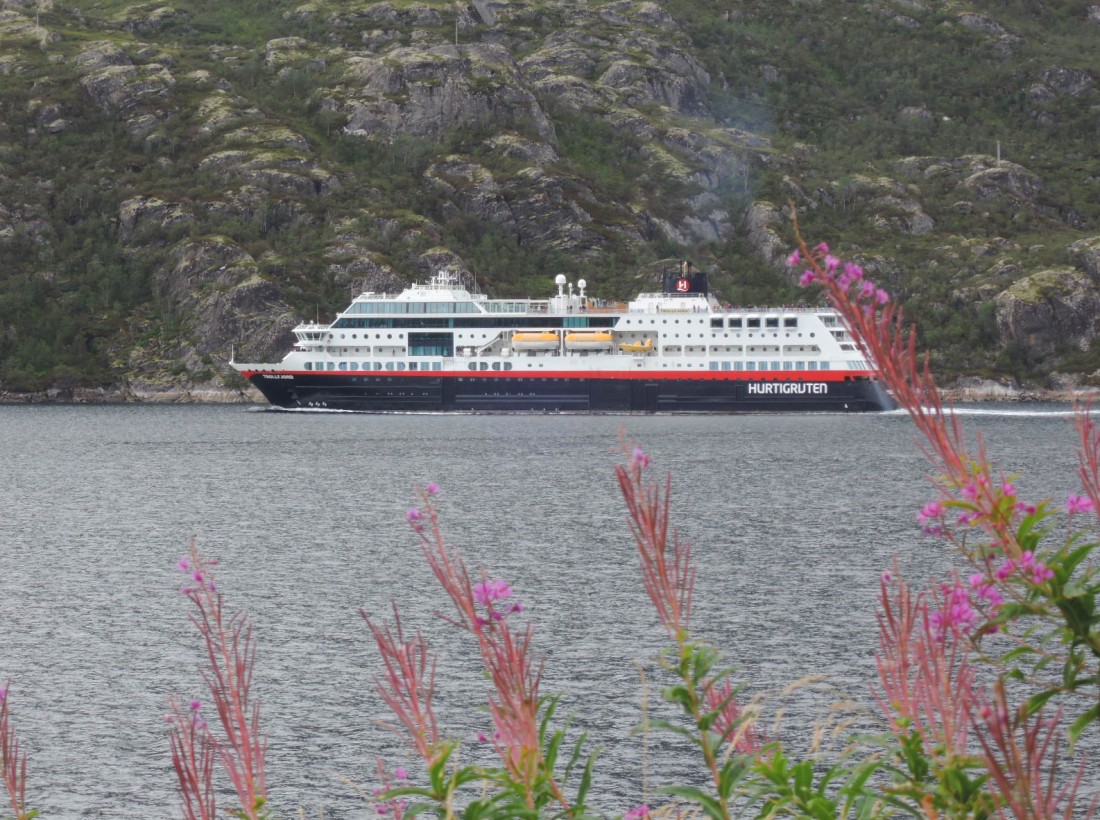 And what a bizarre view, from the shore, that of the ship sailing along that narrow channel under the steep slopes of the mountains, on whose heights large snow patches still remain! 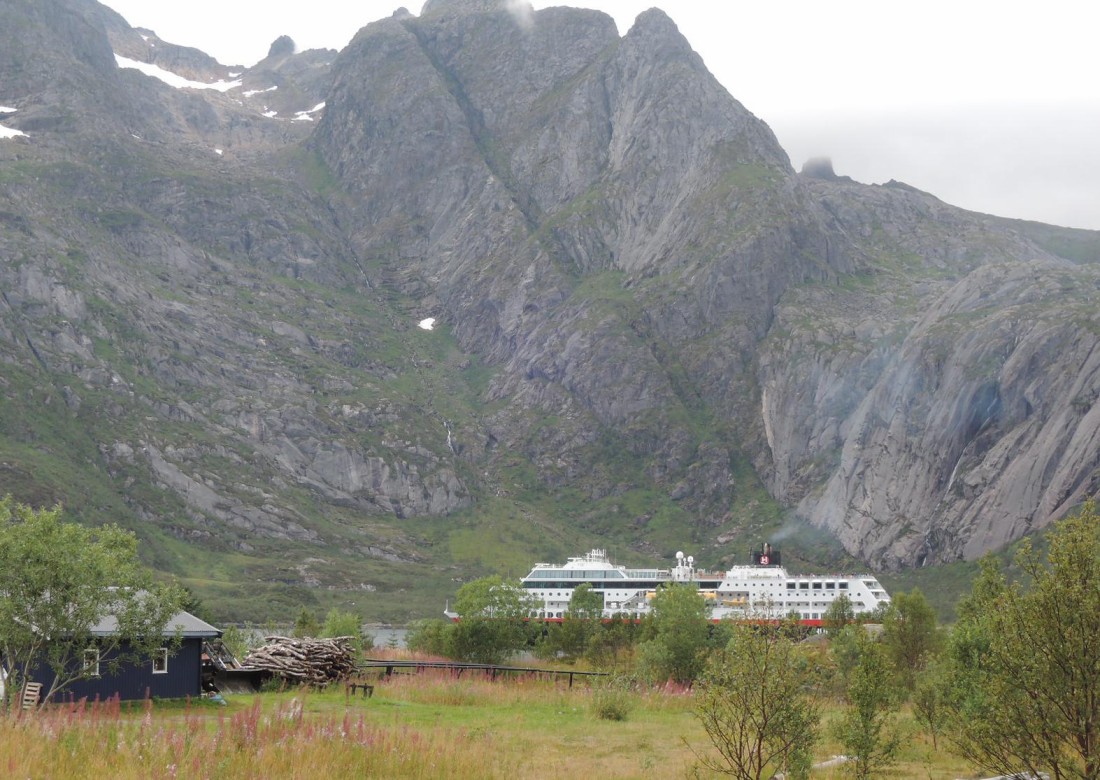 It’s exciting and fun to play like this to the end of the channel, and here’s the inevitable picture involving the two female players in the game: Rosaura and the Trollfjord.

I finally give up the hunt when, the ship veering to starboard past Ulvoya islet and heading for the everlasting glaciers, I lost sight of her. 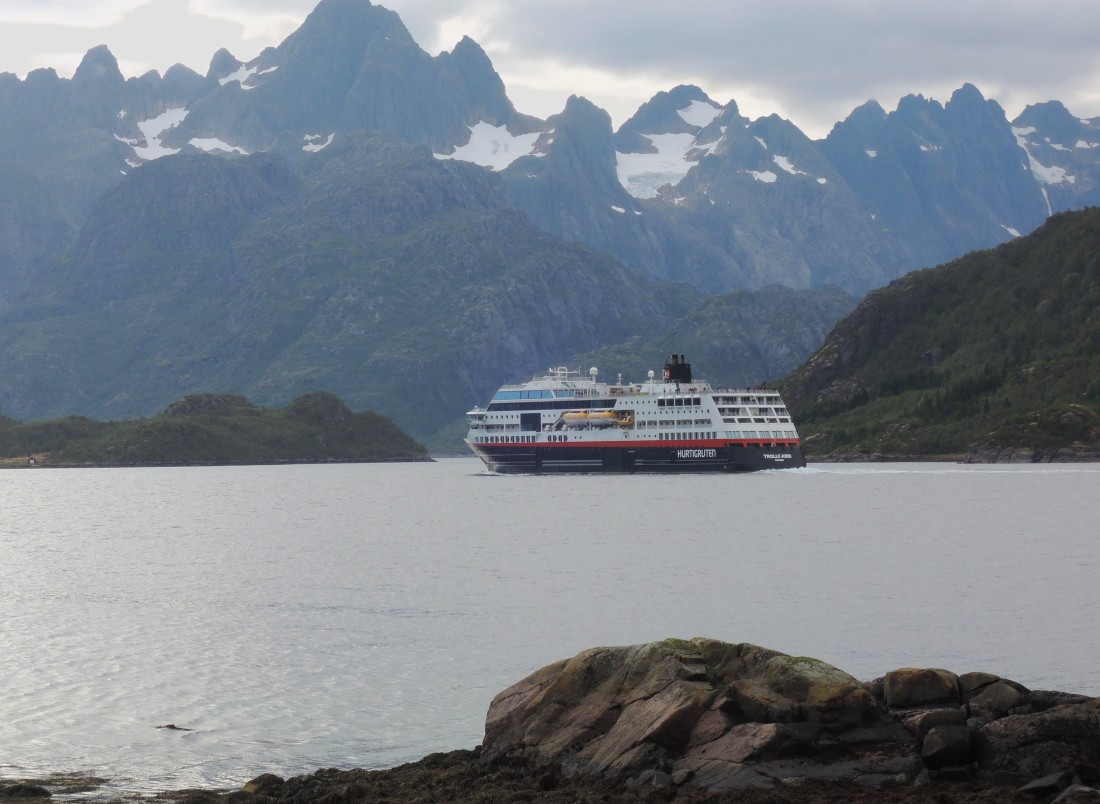 Before turning round, I contemplate for a while the superb landscape in front of my eyes: the mountains rising above the sea, silhouetted against the twilight and offering to the heavens their height cups filled with milenary ice. Then I go back to the bridge and carry on. 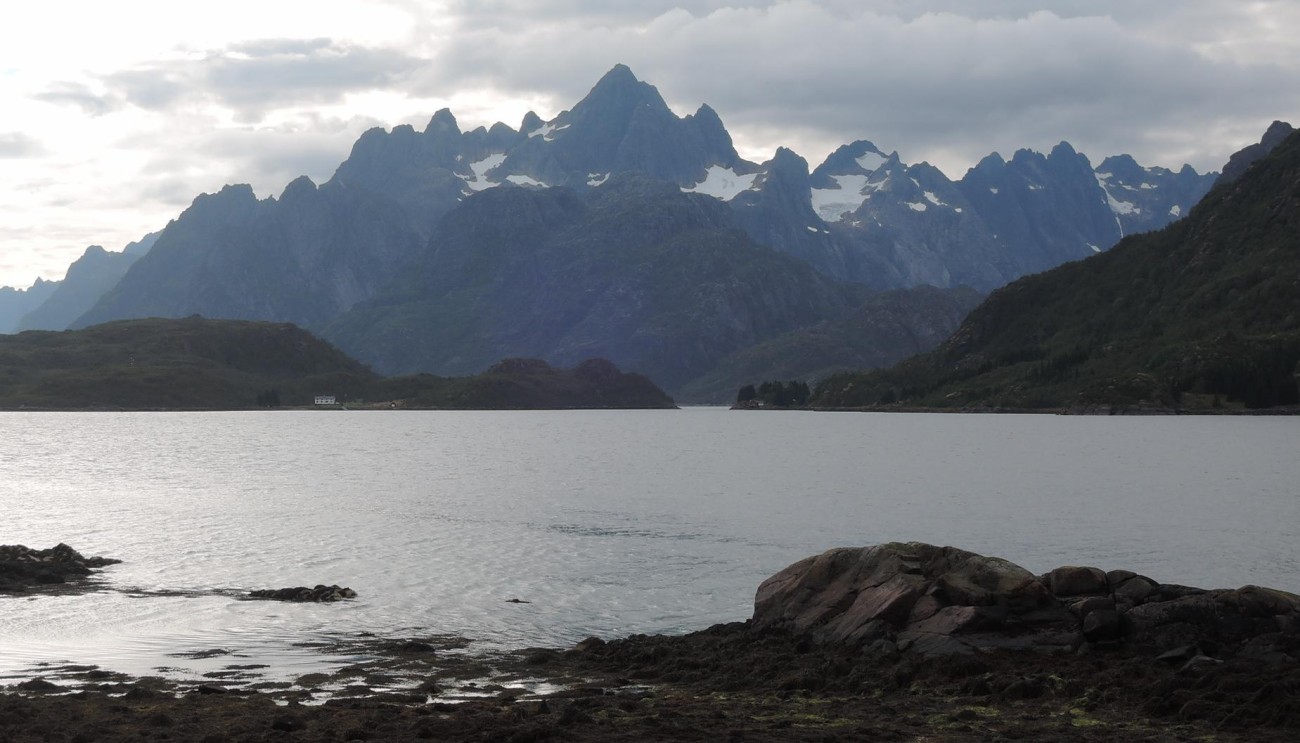 Back on the main road and barely five minutes east of the bridge I happen to notice a small board on the shoulder by the beginning of a track, set on a tripod and hand-written: HOUSE FOR RENT, then a phone number. I’d rather ride a few more kilometres yet, to make for the time I’ve lost hunting the ship, but dusk is coming and I’d like to make sure I have somewhere to stay. So, I place the call and ask. It costs 500 Crowns; which is very affordable if the house is worth it.
The place is only a few hundred metres down the hill, along a very steep dirt road that makes me regret my decision for a couple of minutes: Rosaura is not a trail bike, and gravel doesn’t fit her.

The man is already waiting for me by the house: a wooden construction in two floors, somewhat dull from the outside; but when he sees me in I get preplexed: downstairs there’s a hall, bathroom and a large living room featuring beautiful views towards a small bay on the Myrlandsfjorden, and a wide kitchen perfectly equipped.

Upstairs there’s another bathroom plus three cozy rooms that sleep six people total. I book the house for two days. Where else in Norway am I going to find such a bargain? 60 € for a well furnished house with the best views you can dream of, by the sea, at the foot of the mointains… that’s something you don’t hit every day.

My landlord, well in his sixties, turns out to be a good person. Lives with his wife in a second house in the property, and they both welcome me very cordially. Among other things, when I tell them I have no food on me, they provide me with a few things to eat and have breakfast in the morning, as there are no shops around. They’re kind, talkative and cultivated people. Every morrow –the man says– he goes on his boat for some fishing, and that’s about what they need for eating. As a matter of fact, one of the bites they’ve given to me is a piece of halibut he catched in the morning, deliciously cooked. They also provide me with all the information I need to know about the maelstrom (the legendary vortex of the sea), including a tide schedule, and then advice regarding the ferries that link Lofoten archipelago with the mainland.
I’m thus ready to explore tomorrow these incredible islands.