Porsanger is the westernmost and best known of Finnmark’s big peninsulas, as it harbours the very famous Nordkapp (Cape North), allegedly the northernmost tip of Europe, though actual things are a bit different: first off, it is not on the mainland, but on an island called Mageroya, at the end–and as a continuation–of Porsanger, whereof it is separated by a channel 1 km wide; secondly, Nordkapp is not northernmost cape of Mageroya either, but Knivskjellodden, one mile further up. Why then has Cape North got the name and the fame? Two reasons: not only it is a higher and more stunning promontory, but also the people who named it didn’t have measuring instruments as precise as there are today, and a small difference in latitude wasn’t easy to determine: one mile hither or thither is a trivia when North Pole is still 1,400 miles away. So, Nordkapp got the road and the touristic infrastructure, which includes a famous ice bar, basically a huge freezer where glasses, furniture and other elements are made of ice. In short, a tourist trap.
Or at least that is what people who went there has told me. Bua as I have already been in Slettnes lighthouse, further north in the mainland, and I dislike touristic places, I decide to skip Cape North and keep skirting the coastline to the southwest.
It’s not raining when I wake up in the morning after sleeping in a hut at Borselv’s campsite, but it rained most of the night and my motorcycle is totally wet. Luckily my boots and all the gear have got dried. It’s just a matter of wiping the water away from Rosaura’s seat to start my riding day. The sky is still overcast, though.
Pity there is not a ferry from Borselv for covering the five miles that separate both sides of Porsanger fiord, as it would spare the drivers a 100 km detour along the coast; but I understand that, in this desolated region, it would be very uneconomic. This route 98 that I’m driving for the past three days has barely any traffic. Quite another story is the E6 (to which I’m merging in Lakselv at the bottom of the fiord) that bears most of the nordkappers. By the way, from Lakselv on I’ll be done with the most solitary roads for this journey, as I’ll leave behind the less populated regions, which I entered one week ago when taking road 971 past Inari.
On the other hand, today is also my last day in Finnmark county, the Norwegian share of the old Sami territory also partaken by Sweden and Russia (and Finland, as part of the latter). The first settlers came to this region some 10,000 years ago. Much later on, in 890 a.D., history goes that Ohthere of Hålogaland claimed he lived north-most of all North-men and that no other man lives norther than I live. The Sami are the indigenous people of the region, but later the Norse settled for centuries on the seaboards. For many years Norwegian governments have attempted to norwegianize the Sami, making them “true” Norwegians by forgetting their lifestyle and religion, which were seen as inferior. Only those inhabiting in the innermost areas managed to preserve some of their culture until recently, when the new (hypocritical) policies, presumedly “diversity aware”, have reversed the trend and supposedly try to rescue a way of life for which, unfortunately, there is no room in our global, contemporary world.
Route E6 goes all over Norway along eighteen hundred miles, from Gotheburg in the south to Kirkennes in the northeast, right by Russia; and this road forks towards Nordkapp in a junction called Olderfjord, the beginning of the tourist trap: hotel, campsite, souvenir shop and a couple of restaurants. I am riding to the southwest direction Alta, but when passing by the fork I stop for a moment to buy the well-regarded Nordkapp 71º N sticker, to which I believe I’m entitled. By the way, good news for whomever plans on going to Nordkapp: as of summer 2014, the bridge between the mainland and Mageroya is toll-free. 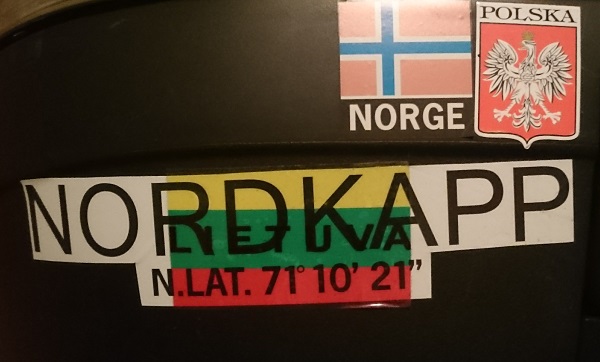 However, McFate has it so that, right while I’m buying the sticker, the road to Alta gets closed because of the Arctic bicycle race, which is coming this way sometime soon. An officer tells me it will be closed at least three hours, and so –I think– this is the price I’m paying for a sticker that McFate, apparently, considers I don’t deserve. Anyway, I must try to put a brave face on it, so I ponder on changing my plans (which are actually no plans) and staying here overnight, because there’s no way I’ll go back and take a detour 200 km longer. But when I tell the gal in the hotel about my situation and ask her for a room, she says she believes the road to Alta will be probably open much earlier, in less than two hours; so I finally opt for waiting. By the way, I’m getting positively surprised by these Norwegians’ lack of greediness: it’s not the first time they place the tourists’ interests ahead of their own; or perhaps they just earn the same wage no matter what; I don’t know; but I actually don’t mind, as long as they’re helping me to save money.
Ready to wait for the cyclists, I sit at a restaurant table drinking a beer, and seize the chance for lunching a hot soup. When eventually the race’s pack arrives, it’s as usual: they pedal so fast –and I’m so slow– that, by the time I get my camera ready for a shot, even the stragglers are gone. All right then, it’s time for jumping on Rosaura –just decked with the sticker of Nordkapp where I haven’t been– and carrying on.
One hundred kilometres further southwest, just cut across Porsanger peninsula, I arrive to Alta, the largest city in Finnmark county with its 20,000 people. But as I don’t find it any special, and as the cheapest hotel costs over one hundred, I keep riding a bit longer, relying on some chance rental huts, so popular here. Barely ten minutes after leaving the city I see my decision rewarded: one kilometre inland along a by-road to the left, hotel & golf club Kvenvikmoen offers a fine room, breakfast included, at an affordable price.
Yet this seems a strange place, this Kvenvikmoen; at least compared to what I’m used: maybe all customers are just playing golf, but however it be, I feel the atmosphere somewhat cold, all the premises being empty, and even the clerk is gone after checking me in. And what about the breakfast schedule from five to seven? Definitely unsuitable for sybarites, rather a hunters’ strange habit. Not that I really care, though, as long as my room is clean, quiet and comfy, and with a good shower; which I can’t complain at all. Still, I suppose no customer would spurn some cozier decoration and atmosphere.
It’s not too late when I go for my daily quota of exercise and take a stroll along a lovely trecking path that winds through a wood of birch, leading to a small lake called Sáhkkobánjárvi, its waters transparent and limpid like chrystal, not the smallest ripple disturbing its surface. It’d pass for a fairy-tale pond were it not for the dry echoes, muffled by the coppice, of shots from a nearby shooting field.