It was when entering Estonia that I had felt I was stepping on Scandinavia’s doorstep, but only after crossing the Baltic sea and going ashore on Helsinki I’ve got the feeling that my journey faces a new stage: the Scandinavian one (or maybe just the Finnish one, we’ll see), of which my first goal is Tampere, a city where I still have some acquaintances I can call friends. Far, though, from heading there along the 175 kilometres’ straight freeway, I’ve rather stuck to my habit, when I travel by motorcycle, of using byroads whenever possible, as that’s actually what’s all about: knowing through contact the countries and regions where I move, instead of just crossing them like lightning, as if I was traveling by plane; and for this purpose it’s essential to keep oneself clear of the speedways; besides–goes without saying–riding a bike on a freeway is boring like hell. So, from Helsinki I headed more or less north along well over two hundred kilometres, until in the evening of my second day on Finnish land I ended up in the small locality of Sahalahti.

Little acquainted with Finland’s accomodation infrastructure (or rather the lack thereof) I had to spend my first night in a campground, whereof there are hundreds, as corresponds to a country where most people spend their holidays going camping. Very few travelers here use hotels, these being scant and expensive, and most vacationers end up holidaying in campsites (when they don’t have a summer cottage, that is), where they lodge either in their own caravans (quite common in Scandinavian countries), tents, or in wooden huts, which vary from small single-bedded units to large family-geared cottages with two dorms, private bathroom and even sauna. I was given one of the smallest, as I don’t need anything bigger that would fall out of my budget.
The first thing I missed was bed linen; I didn’t think of it when preparing my luggage, and I don’t carry a speeping bag either, room being so precious for a motorcycle traveler, it would use up a full side case. Hut beds come always on a naked mattress, and renting linen for just one night doesn’t pay off; so, I resolved to sleep on my towel and buy a sheet further on, as I’ll need it often along the upcoming weeks. For the rest, no complaints; the little cottage was barely a doghouse, but enough for my needs, with a bed, a small table, a stool and a heater, good for nothing these warm days.

There was also a lake where children were playing, and I seized the opportunity for taking a dip before having a shower. Despite what it might seem in Finland, lakes are almost tepid in summer, waters being quite shallow and very dark coloured (because of the turf), which makes for a high radiation absorption. And shallowness is also the reason why waters cool down and froze in whiter as fast as they warm up in summer.

As to sauna, I’ve disregarded it despite being so fond of. Not that there was none, nor because of the price, quite affordable, but we’re getting highs above 30º Celsius these days and sauna makes no fun like that. For the past weeks I was hoping to find this side of the Baltic some nicer weather–meaning cooler, but such hope has proved false; and you can’t possibly enjoy sauna on a warm weather and waters, the best side of it being precisely to feel and experience high inside/outside contrast.
I arrived on an empty stomach. Given that I normally don’t carry any food on the bike and as there wasn’t anywhere in a few kilometres’ radius where to have a proper dinner, I had to do with a couple of pizza slices in the small snack bar by the reception. And it did the trick, giving me some energy for a long stride along the road; not that I like to walk on asphalt, but the forest track was infested with mosquitoes, which are the real nightmare on summers this side of the world; indeed, although we tend to link those jolly insects with tropical climates, truth is, subartic regions swarm with them during the hot season, most of all in lake areas.
Talking about dipterans, they’re what I was most afraid of for bed time, because inside my hut it was so hot after the sunny day–very long this time of the year–that I knew I wouldn’t fall asleep unless I left the door ajar, in order to let in the night’s coolness. But, being cautious enough not to switch on the light, plus a little bit of luck, the mosquitoes didn’t visit me. Yeah!

As usual when I go camping, I’ve woken up quite late. Don’t ask me why. Luckily I’m not in a hurry, plus I don’t have much things to pack, nor does it take me too long to harness the bike. In any case, it was before midnight when I was riding Rosaura under the tall, wooden archway of the campsite.
Not to break this one-month-long spell, today it’s been as hot as the previous days, or even hotter. Anyone having traveled through really torrid lands will laugh at the present thirty plus Celsius, but for a country like Finland such highs kept for such long time mean quite a record, and that’s why most locals say that, so far, this is the hottest summer of their lives. Yet, there’s still people who stubbornly deny global warming… 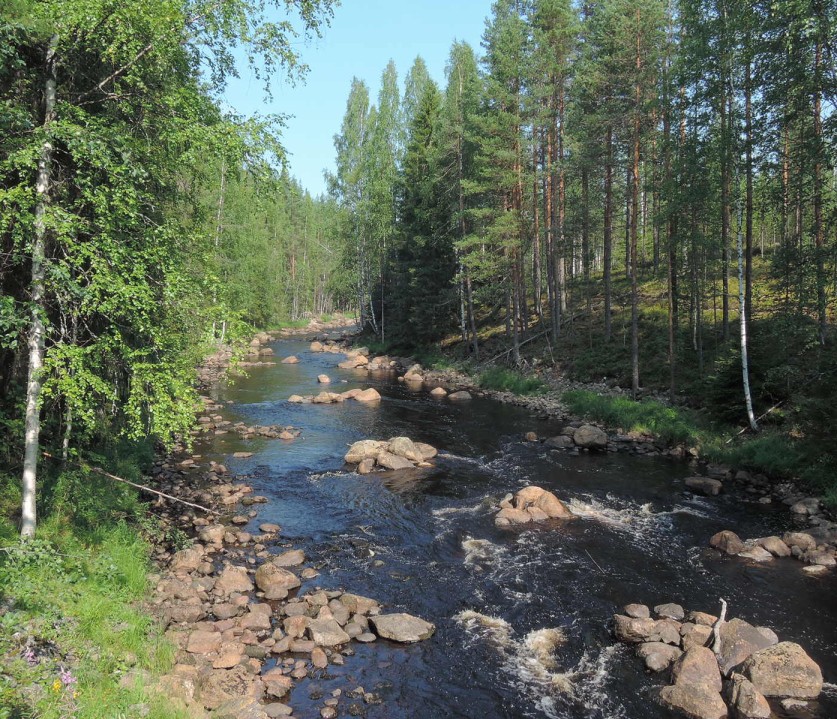 In keeping with the course I took yesterday, I’ve ridden northwards today, through Finland’s endless woods and countless lakes, with the idea of first gaining the latitude of Tampere then heading there by turning left, to the west. But besides trees and water there has been no highlight today, the only remarkable event being the quick and freshening dip I’ve taken in a lake along the road. It needs to be said that, in Finland, law lays down universal right to freely move around wherever, including private land, which means there are no grounds for ‘private property, no trespassing’ sign type; and that’s why you find none. Lands, lakes and woods are free to walk even if private owned, provided you do no harm. So if you feel like–say–take a plunge (as has been the case), you only have to come by the nearest lakeshore and get into the water without needing anyone’s permission but your own; which of course doesn’t free you from good manners.
So, when I was sufficiently bothered by the day’s heat, and as the road was running along a lake in whose shore I was spotting through the trees several bathers or Sunday excursionists, I seized the chance and I pulled over to a track towards the shore. There was a small jetty where a family was frolicking and, after politely asking them permission to use the jetty, I undressed, put on my swimming trunks and took a lovely swim one hundred metres inlake. Once I was done, I laid down on the jetty to dry out, and they started talking to me. A couple with three children they were, welcoming and curious as Finns usually are. And despite their slow English, we managed to chat for a while. I was even offered a soda, but I refused, as I’m not too fond of pops. Had it been a beer I wouldn’t have rejected it.

Obviously they asked me about my trip. I am now sufficiently far from Spain for calling people’s attention; they want to know about a biker who’s come to visit here after so long a ride; and I also enjoy being the subject of such a surprise, even though, to be honest, I envy them more than they envy me. But I say nothing because, in the bottom, I know they enjoy imagining that they might one day do themselves such a journey like mine, and that’s because they ignore it’s a journey to nowhere; there’s no need for them to know anything about my spiritual burden; no need to hinder their fantasies by telling them their simple lives are, quite likely, better than my freedom, given the price to pay: this existential anguish of mine and, well, some other things I’d rather keep to myself.
As I wrote above, in the early evning I’ve arrived to Sahalahti, where I’ve found a place to stay overnight. I had been looking for accomodation a while since, but in Finland it can be quite tricky to find a lodging; you shouldn’t rely too much on good luck. Actually, the place I’ve finally found, a B&B called Ranta-hölli, is a four kilometres dirt-road ride, luckly in good shape. By the way, I almost go back empty handed: upon arrival I saw nobody, not even a car, and I thought it was closed. Hopefully I rang the doorbell, and I was about to leave when the owner has opened the door; which I’m quite glad of, because Ranta-holli so fine a place, I hardly could have come across anything better: nice bedrooms and facilities, a pretty and fully equipped kitchen, a large dining room with an amazing six metres long massive wood slab table, beautiful views and an unbeatable sauna cottage right by the lake. You’d need to inspect the place very narrowly to find some blemish. Besides, the host is a kind and capable lady, good humoured, and her fluent English makes for a clever conversation. So, this is going to be, I guess, my home for the next two or three days. Not always is a traveler that lucky to find a lodging where he feels comfortable enough to extend his stay.