Yet one more day. How many, already? It’s seven weeks since I left home; seven weeks journeying not knowing where to, heading vaguely north, maybe escaping from hot weather withouth having so far succeeded. Now the sun is chasing us, Rosaura and me, along the Lithuanian swamp; though we might get some rain this evening: it’s only past noon but a thick haze starts drawing cloud silhouettes on the horizon, like the watercolour pigments draw shores on the patch’s edges.

Shortly fifty kilometres north of Kedainiai, where I’ve spent the night, I make a stopover in Panevezys –an ugly industrial city– for exploring its old town in search of some hidden treasure. But I get disappointed: the centre was almost totally destroyed by Soviet authorities along the industrialization decades following WWII.

After one hour strolling the old town streets, tired and sweaty, I come across a scene, at the foot of an old, neglected brick building, in the middle of an empty plot, a scene that irresistibly attracts me: at the tables on a shaded terrace, a guitar man is singing a beautiful Russian song in a casual, free-and-easy manner, while some other customers talk to him, or join the song’s chorus, or engage in some brief debate. I get a bit closer, but a vague misgiving holds me back for a moment: the place is somewhat mucky, everyone is drinking and someone is drunk. In these countries you never know. Finally, curiosity prevails and I make up my mind to go and drink something.

Upon crossing the door I find myself within the dim premises of a bizarre brewery where apparently you can’t but buy beer of some kind or other. As I don’t know which, I ask for advice to the waitress, a pretty young lady with big blue eyes and this bearing of femme fatale, the kind who drives men to madness. But I’ve come here for enjoying the singer, not to run insane, so I bring my beer outdoors and take a sit in a corner, ready to just listen…

The musician, a humble-looking elderly man with short white hair, has the seductive features and demeanour of a strong individuality. Between sip and chat, he finely plays the guitar and sings, on a well-toned voice, songs of old Russia filled with feelings. I take some recordings of this unique, unrepeatable moment. (Unfortunately, the sound quality is quite poor, but it’s nonetheless a precious souvenir.)

In turn, I’ve also awaken their curiosity and I feel observed, though not unwelcomed. When I finish off my beer I go inside and order a second one, plus another for the artist. Back in the terrace, I put the glass on his table and he thanks me, ‘spasibo’, with a nod of his head. I quickly realize that I’ve just been accepted into the group. Soon I’m addressed by someone. It’s a young couple who can speak English; the others only Lithuanian and Russian. I regret having dropped my Russian studies at an early stage, as I’m now unable to remember anything. But the magic of communication has already taken place thanks to music and alcohol. I start chatting with the copule, keeping always an ear on the guitar man, who every now and then joins us, as well as the others. We overcome the best we can the hindrnace of language; the atmosphere eases and everyone treats me nicely and warmly. Someone takes a few shots.

After a long while, one by one, people start dropping off. When the singer leaves he shakes my hand and I thank him heartfeltedly for having gifted me with a one-in-a-lifetime experience, intense and moving, of the unforgettable kind.

There’s only the couple and me left in the terrace, and I ask them about the guitarist’s story. They’re not quite sure themselves, but as far as they know, he’s a Russian artist who used to be the leader of a known band, playing in weddings and parties, or rehearsing in concerts. As “modernity” arrived, the band became less demanded, youth looked for something more fashionable and “European”, their songs got outdated and they were forced to disband. Now he was just a drinker who, every now and then, happened to amuse a chance audience for the sole pleasure of singing and playing. I find it sad and, once again, I think of the damage that globalization, and so-called “progress”, do to cultural diversity, to authenticity.

As we were sitting here for the past two hours the sky kept getting cloudier, and now it’s overcast. Then the downpour starts. I’m asked which are my plans and I answer no plans. ‘Are you staying overnight in Panevezys?’ I hadn’t think of it, but why not? It wouldn’t make much sense to keep riding today, under the rain. They’re a nice twosome, these boy and girl who are not really a couple. They kindly offer to help me with finding accomodation and to keep my company for the evening, and I gladly accept. But first, when it clears up, I treat them for lunch at some Lithuanian restaurant of their choice.

The hotel is quite spartan, Soviet style, but totally fine for me. Despite being in the centre, I wouldn’t have ever found it hadn’t it been for these guys. At a distance it doesn’t look like a hotel, and it’s nowhere on the internet. What I don’t like is to park the motorcycle right in the middle of the street, but I hope nothing happens. After our meal they take me to a bar by a tall old tree whose bark is covered with hundreds of keys nailed to it. Funny.

A friend of them joins us here, a true character with a clever conversation, and in this company our evening slowly goes by. This is the best way of getting acquainted with a nation, I say to myself. Neither books nor TV programs, nor media, but direct contact with people, if one can afford it.

We talk about many things, of course, but eventually we run short of topics. After a while, I tell them I’m leaving. We exchange our social network names and bid farewell to one another, warm-heartedly.

I’m very grateful to them for the experience, for having helped and befriended me, but when I’m walking to the hotel, and ’til the end of that day, I can’t stop thinking about the guitar man, his nostalgic and evocative Russian songs, and his defeat at the hands of the Western fashion… 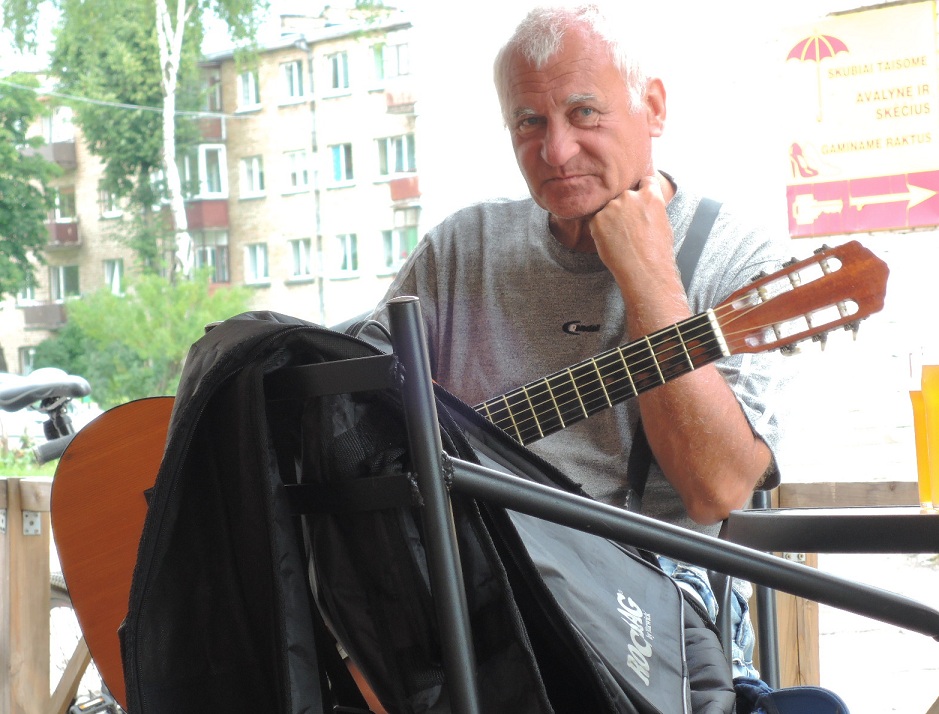